The Spring 2012 issue of the William Mitchell Law Review includes "Breaking the Census: Redistricting in an Era of Mass Incarceration," an article by Peter Wagner that provides a comprehensive overview of the problem of prison-based gerrymandering, and a summary of best practices to prevent the Census Bureau's prison count from skewing state and local redistricting. The January, 2012 issue of the Missouri Municipal Review includes Peter Wagner's article on how the Census Bureau's prison miscount creates problems for Missouri cities at redistricting time. Since the Census Bureau counts incarcerated people as they they were residents of the cities in which they are confined, city officials who are redrawing city council lines must decide whether the people who live next to the prison should be given more influence over city affairs than other residents.

Read more of the summary or jump right to the full article. The New York Times cites our research on prison-based gerrymandering in the New York Senate, in upstate counties, and in Rome, New York in an editorial entitled An End to Prison Gerrymandering.

The editorial hails New York State's new law to end prison-based gerrymandering for bringing benefits to all and says it should be emulated around the country.

Read the rest of the article: Census Bureau’s Counting of Prisoners Benefits Some Rural Voting Districts

We also have more information about some of the places cited in the New York Times article:

NEW YORK, Dec. 13 — The United States Census practice of counting prisoners in their districts of incarceration rather than their home districts for the purpose of establishing electoral and Congressional representation is a violation of international treaty. This month, the non-partisan public policy and advocacy centers Demos and the Prison Policy Initiative (PPI) submitted their analysis to the Committee for the Elimination of Racial Discrimination (CERD) in Geneva.

Demos and PPI urged the committee to scrutinize the racially discriminatory redistricting practice of crediting rural white counties with additional population based on the presence of disenfranchised prisoners in violation of Article 5 of the International Convention on the Elimination of All Forms of Racial Discrimination. The Demos/PPI comments were included in a larger submission [PDF] prepared by the U.S. Human Rights Network.

The United States ratified the CERD treaty in 1994, and therefore is bound under international law to work to eliminate policies that are intentionally or unintentionally racially discriminatory. The CERD treaty obligates each country to report every two years on its progress at eliminating racial discrimination. The United States submitted its report [PDF] in April and will be questioned by the CERD Committee in Geneva in March 2008. The Committee looks to individuals and organizations in each county to critique the reporting counties report and to highlight omissions.

See the press release, the text of the Census/redistricting section or the entire prison submission. 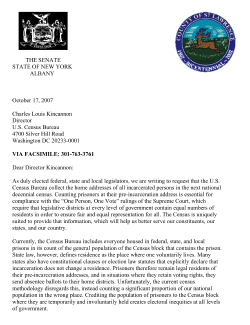 October 18 — New York State Senator Eric Schneiderman, St. Lawrence County Legislator Tedra Cobb and federal, state and county legislators in New York, Illinois and Texas have called on the United States Census Bureau to begin counting prisoners in their home communities, rather than where they are incarcerated. The elected officials and criminal justice and democracy advocates also announced the beginning of a national letter-writing campaign by local elected officials in New York and around the country to urge a change in this policy.

Read the press release from the campaign launch, the Schneiderman/Cobb letter to the Census Bureau and learn how you can get involved in organizing your elected officials to join this campaign. 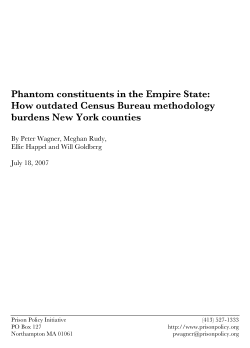 The federal Census counts state and federal prisoners as part of the local population, and that creates big problems for county government, charges a new report by the Prison Policy Initiative. The report explains that the Census Bureau wants New York county governments to use its data but counts prisoners as residents of the prison location, which violates the New York State Constitution. Counting prisoners as residents, despite the fact that they can’t vote or participate in the communities where they are incarcerated, leads to unequal distributions of political power.

The report, Phantom constituents in the Empire State: How outdated Census Bureau methodology burdens New York counties, examines how New York City and the 30 New York counties with prisons handle the flawed data, commending 13 counties that adjust the census to prevent equal representation from being damaged. The report is the first to analyze local governments’ response to the inaccurate Census data and to measure the dilution of voting power within each county in the state.

On January 17, The New York Times editorial board called for the 2010 Census to include a test run at counting the nation’s 1.4 million prison inmates at their permanent addresses instead of in prisons. The change, says the editorial, “would help bring an end to a corrosive but little known practice that distorts the political process in virtually every corner of the country.

Inmates are denied the right to vote in all but two states. But state lawmakers treat them as residents of the prisons when drawing legislative maps, to inflate the head count in lightly populated rural areas where prisons are typically built. This creates legislative districts where none would ordinarily be, shifting political influence from the heavily populated urban districts where inmates live.

While calling for the Census Bureau to start figuring out the best way to count people in prison at their home addresses, the New York Times also endorsed an important interim proposal. If the Census Bureau published detailed counts of the prison populations alongside the redistricting data, states and counties could choose to subtract the prisoners when drawing districts.

The Census Bureau has a crucial role to play in putting and end to this despicable practice. The 2010 census is as good a time as any to get started. Finding that “the evidence of political inequities in redistricting that can arise due to the counting of prisoners at the prison location is compelling”, the National Research Council of the National Academies has called for the Census Bureau to begin collecting the home addresses of people in prison and to study whether this alternative address should be used in the Census. The report, authored by leading demographers, statisticians and sociologists, was commissioned by the Census Bureau to reexamine where people should be counted in the Census.

The Prison Policy Initiative submitted oral and written testimony to the panel in 2005 and 2006.