Each decade, Maryland and its counties redraw their legislative districts on the basis of population to ensure that each district contains the same population as other districts. In this way, all residents are given the same access to government, fulfilling the Supreme Court’s “One Person One Vote” rule. 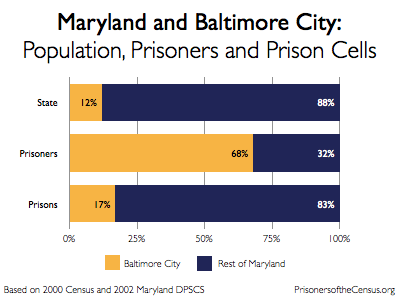 However, unless the state takes action to correct a flaw in the Census Bureau’s data, this effort to draw fair districts will fail.

The Census Bureau counts incarcerated people as residents of the prison location, even though they cannot vote and are not a part of the community that surrounds the prison. In Somerset County, a large prison is 64% of the 1st Commission District, giving each resident in that district 2.7 times as much influence as residents in other districts. Using prison populations to enhance the weight of a vote in districts that contain prisons dilutes the votes of all other residents in the county. 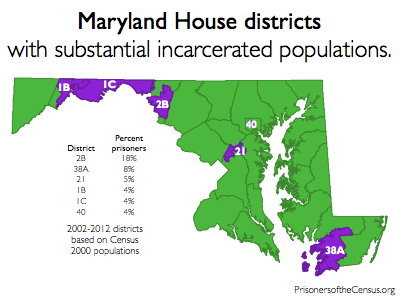 Counting prisoners in the wrong place also distorts state legislative districts. For example, in House District 2B (near Hagerstown), 18% of the district’s population consists of incarcerated residents from other parts of the state. Padding this legislative district with additional prison populations dilutes the votes of all residents in other parts of the state. The state has decided, in effect, that every group of 4 people who live next to the large prisons in District 2B should have as much representation as 5 people who live anywhere else in the state.

The solution is simple. Fix the Census. The state is required by federal law to redistrict each decade, but it is not required to use federal Census data to do so. In fact, there is a long tradition of state and local governments fixing shortcomings in Census data. This year, for the first time, the Census Bureau will be publishing an early data file that will assist states and counties in finding correctional facilities in the census data. The state can simply collect the home addresses of incarcerated people and adjust the Census data prior to redistricting to count these populations at home.

The basic principle of our democracy is that representation is distributed on the basis of population. SB400/HB496 will end the practice of granting “Representation Without Population.”