The original U.S. Constitution used enslaved people to grant extra political clout to the states with lots of slaves, shifting the balance of power. This dynamic has a contemporary parallel. 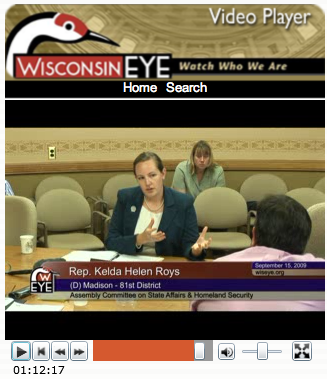 I was recently watched some striking footage of a Wisconsin Assembly hearing from September, 2009, about Assembly Joint Resolution 63 to exclude incarcerated persons from redistricting data. The video begins with a discussion of how to count incarcerated people in Wisconsin, but then quickly turns into a heated debate about how prison-based gerrymandering relates to our nation’s conflicted history with the concepts of personhood and equal representation. To me, the fact the conversation veered into such fundamental questions shows how sometimes the solutions to prison-based gerrymandering can be counterintuitive.

When incarcerated people are counted as residents of the district in which they are incarcerated, the actual residents of that district get undue additional political clout and the voters who live everwhere else lose out. The ideal solution is to completely solve the problem by counting incarcerated people at their home addresses. But, although it may sound strange at first, the second best option is for incarcerated populations to be removed from redistricting data altogether. The video I watched was about this second approach. Wisconsin 2009 Assembly Joint Resolution 63 sponsored by Representative Fred Kessler proposed to remove prison counts from Wisconsin’s redistricting data.

But this idea didn’t sit well with Representative Kleefisch. Given the United States racially disproportionate incarceration rates and pernicious history of denying racial minorities their civil rights, he asked, doesn’t the proposal to exclude prisoners from redistricting counts hark back to the infamous practice of denying certain individuals their full personhood?

Representative Kelda Helen Roys responded to this question by drawing an apt historical connection to the infamous 1787 constitutional clause that counted each slave as three-fifths of a person for the purposes of Congressional redistricting, even though they were denied the right to vote. The three-fifths clause had the effect of using slave population numbers to artificially beef up the political power of the Southern, white, property-owning voters who were invested in maintaining and expanding the slave system. But the problem with the three-fifths clause wasn’t that the slaves were counted as only a fraction of a person. After all, since their “political clout” went right into the hands of the very people who exploited them, the political distortion would have been even greater had they been counted as full people. The problem was that slave populations were used to artificially inflate the political power of the very same people who went to great lengths to deny them their right to personal sovereignty, much less their right to vote.

When a government engages in prison-based gerrymandering, incarcerated people, who disproportionately come from minority and urban communities, are stripped of their right to vote but still included in the population counts of the disproportionately white districts in which they are incarcerated. Their political clout is essentially handed through the bars to the real residents of the community that contains the prison, giving certain people more political say simply by virtue of their residential proximity to a large prison. This also gives the legislators who represent districts that include prisons the power to use incarcerated people’s bodies to count against their own interests by supporting punitive criminal justice legislation, as such representatives are utterly free from accountability to their non-voting “constituents” behind bars.

It’s just as unfair as it sounds. And Representative Roys’s observation about the connection between prison-based gerrymandering and the three-fifths clause isn’t abstract history. Let’s look at a contemporary example.

New York State Senator Nozzolio represents the 54th senate district, which includes several large prisons. Senator Nozzolio has a long history of opposing the New York bill that ended prison-based gerrymandering, insisting that the people incarcerated within his district are unquestionably his constituents. But does he make an effort to ensure that his so-called constituents in prison have a say in the legislature? Not quite. “I haven’t really focused on [prisoners],” he stated, admitting that he is far more attentive to the needs of the people who work in prisons than the people who are incarcerated in them. In fact, Nozzolio was a staunch opponent of the successful movement to overturn New York’s harmful and unpopular Rockefeller drug laws, which had resulted in locking up unprecedented numbers of non-violent offenders for long amounts of time. Perhaps Senator Nozzolio would not have felt so strongly about keeping the draconian Rockefeller drug policies if they hadn’t been responsible for importing a sizable portion of his “constituents.”

But thankfully it’s not always true that legislators with prisons in their districts feel so comfortable helping themselves to imported political clout.

Senator Pugh and Delegate Pena-Melnyk of Maryland, for example, both represent districts with large prisons. But unlike Senator Nozzolio, Senator Pugh and Delegate Pena-Melnyk recognized the problem of prison-based gerrymandering and were the lead sponsors of the successful 2010 legislation that ended prison-based gerrymandering in Maryland.

So, when Wisconsin Representative Kessler proposed to exclude prison populations for redistricting purposes, his goal was to stop granting unwarranted political clout to disticts that contain prisons. Taking incarcerated people out of redistricting data entirely is ultimately preferable to counting them as residents of the prisons in which they’re incarcerated and allowing their representational clout to be handed over to the wrong community. But, ideally, Wisconsin and other states with prison-based gerrymandering problems would take a tip from states like New York and Maryland and pass statewide legislation to ensure that incarcerated people are counted in the right place: their home communities.