Article examines how the prisoner miscount distorts democracy in Ohio cities that have large prisons and highlights one city for excluding the prison population prior to redistricting.

With the 2010 Census approaching, a key question presents itself: Where should Ohio’s prison population be counted? There is a nationwide controversy about the Census Bureau’s practice of counting prisoners as residents of the prison location. This practice unconstitutionally inflates political clout in rural prison towns by counting nonvoting prisoners as part of the constituency. Even though the Constitution dictates that all votes be given equal weight, the Census’s method for counting prisoners has caused some areas to afford voters more than twice the power of others. Though the issue has been addressed at the state level, the prisoner miscount’s impact on local government has been much more severe and has gone largely unnoticed.

The established principles of residency dictate that prisoners are not residents of their prisons. To become a resident, a person usually has to voluntarily move somewhere with the intent to stay. Furthermore, a person can not lose a residence until a new one is acquired. Prisoners, who are taken against their will to a facility likely far from their hometown, and who intend to return to their hometown immediately upon release, can hardly be considered residents of their temporary confinement location.

In Ohio, cities draw ward lines for the purpose of representation on the city council. When cities use census counts of prisoners to draw their wards, they give more voting power to people who live near the prison. This violates the Supreme Court’s “One Person, One Vote” rule, which prohibits giving some people more political power because of where they live.

Mansfield has an equal representation problem that exceeds all others in Ohio. The city of Mansfield had a 2000 census population of 49,346, of which 4,612 were incarcerated in state prisons. After the 2000 census, Mansfield drew their six wards to have about 8,600 people in each, seemingly in compliance with the “one person one vote” principle. However, two large prisons, Mansfield Correctional Institution and Richland Correctional Institution, account for 60% of Ward 5’s population. 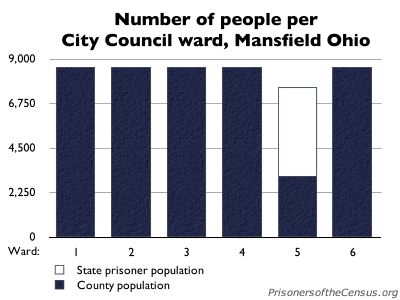 Using prisoners to pad out the population gives the 3,000 actual residents of Ward 5 as much political power as the 8,600 residents of any one of the other wards. Other Ohio cities have the same problem, such as Marysville (Ward 3 is 55% prisoners), Youngstown (Ward 3 is 10% prisoners) and Marion (Ward 1 is 32% prisoners).

Since the Census originally was used only for congressional reapportionment, all that mattered was getting the populations of states correct. Now, local governments rely on Census data to draw their ward boundaries. Sadly, census methodology has remained static while the uses of Census data have evolved.

However, Ohio’s Lima City shows city governments are not powerless. Because, according to Board of Elections Director Keith Cunningham “prisoners have no communications, no voting rights, and are not a constituency,” the Lima city council ignored the prisoners when drawing their ward boundaries. As a result, each ward is equally represented and has the same political power, regardless of whether it contains a prison.

The Census can and must provide data to local governments on the true residency of prisoners. Such a change would have a profound impact in facilitating equal representation at all levels of government.

Uses of census data have changed and census methodology must now follow. Prisoners, who cannot vote, are not mobile, do not pay taxes and cannot interact with others outside the prison should hardly be considered residents of the communities where they are incarcerated. Until the Census Bureau is willing to modify their methodology for counting prisoners, local governments will continue to be faced with the daunting decision of tediously removing prisoners from their ward counts or living with severe and unconstitutional distortions to their democracy.

John Hejduk is a law clerk at the Prison Policy Initiative.