MANSFIELD — The city will have to reconfigure ward boundaries as a result of the final population figures from the 2010 U.S. Census….

[Law director Dave Remy] told council before it redraws ward boundaries it must decide if it wants to include the inmate populations at the Mansfield and Richland Correctional institutions. He said the 5,500 inmates in the two institutions account for 60 percent of the population in 5th Ward.

“That’s fifty-five hundred people who are locked up and disenfranchised and could not vote if they want to,” Remy said. “There has been a movement in the state that cities with prisoners should consider taking prisoners out of ward representation.”

He pointed out that Mansfield has the largest prisoner population of any ward in any city in Ohio. Remy said taking inmates out of the reconfiguration formula would not affect federal programs….. 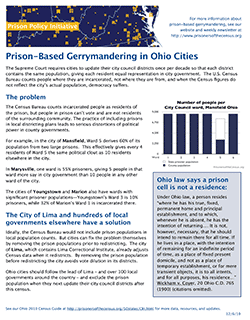 I assume that the City of Lima will again refuse to pad one city council district with the prison population, but no word yet on whether Marion, Marysville, and Youngstown are considering avoiding prison-based gerrymandering.