NYT: Why Some Politicians Need Their Prisons to Stay Full

The mandatory sentencing fad that swept the United States beginning in the 1970’s has had dramatic consequences — most of them bad. The prison population was driven up tenfold, creating a large and growing felon class — now 13 million strong — that remains locked out of the mainstream and prone to recidivism. Trailing behind the legions of felons are children who grow up visiting their parents behind bars and thinking prison life is perfectly normal. Meanwhile, the cost of building and running prisons has pushed many states close to bankruptcy — and forced them to choose between building jails and schools.

Seldom has a public policy done so much damage so quickly. But changes in the draconian sentencing laws have come very slowly. That is partly because the public thinks keeping a large chunk of the population behind bars is responsible for the reduced crime rates of recent years. Studies cast doubt on that theory, since they show drops in crime almost everywhere — even in states that did not embrace mandatory minimum sentences or mass imprisonment. In addition, these damaging policies have done nothing to curb the drug trade.

Changing prison policy, however, is no longer a simple matter. The business of building and running the jailhouse has become a mammoth industry with powerful constituencies that favor the status quo. Prison-based money and political power have distorted the legislative landscape in ways that will be difficult to undo.

These problems are on vivid display in New York, which started mass imprisonment when Gov. Nelson Rockefeller persuaded the Legislature to pass the toughest drug laws in the nation at the start of an ill-starred “war on drugs” 30 years ago. The Rockefeller laws introduced the country to mandatory sentencing policies that barred judges from deciding who goes to jail and for how long. Instead, the laws required lengthy sentences — 15 years to life — for nonviolent, first-time offenders, many of whom would have received brief sentences, drug treatment or community service under previous laws.

Nearly all of the prisoners ended up in upstate New York, where failing farms and hollowed-out cities offered a lot of room for building. Politicians in these sparsely populated districts caught on quickly and began to lobby to have the new prisons located in their communities. As a result, nearly 30 percent of the people who were counted as moving into upstate New York during the 1990’s were prison inmates.

The influx of inmates has brought desperately needed jobs to the region and resulted in districts whose economies revolve around prison payrolls and whose politics are dominated by the union that represents corrections officers. The inmates also helped to save political careers in areas where legislative districts were in danger of having to be merged because of shrinking populations. Inmates, as it turned out, were magically transformed into “residents,” thanks to a quirk in the census rules that counts them as living at their prisons. Although people sentenced under the drug laws frequently serve long sentences, many prisoners remain behind bars only briefly before returning to homes that are often hundreds of miles away.

Felons are barred from voting in 48 of 50 states — including New York. Yet in New York, as in the rest of the country, disenfranchised prisoners are included in the population counts that become the basis for drawing legislative districts.

An eye-opening analysis by Prison Policy Initiative’s Peter Wagner found seven upstate New York Senate districts that meet minimal population requirements only because prison inmates are included in the count. New York is not alone. The group’s researchers have found 21 counties nationally where at least 21 percent of the “residents” were inmates.

The New York Republican Party uses its majority in the State Senate to maintain political power through fat years and lean. The Senate Republicans, in turn, rely on their large upstate delegation to keep that majority. Whether those legislators have consciously made the connection or not, it’s hard to escape the fact that bulging prisons are good for their districts. The advantages extend beyond jobs and political gerrymandering. By counting unemployed inmates as residents, the prison counties lower their per capita incomes — and increase the portion they get of federal funds for the poor. This results in a transfer of federal cash from places that can’t afford to lose it to places that don’t deserve it.

Lately, polls have shown growing support for drug law reform. In November, prominent New York Republicans ran into trouble when they faced candidates who made Rockefeller reform an issue. In response, the State Senate endorsed a plan that cut sentences for drug possession crimes, which was the easy part. But it stonewalled on the crucial change, which would have returned to judges the discretion to sentence at least some offenders to drug treatment instead of prison.

While other political forces support the mandatory sentences — most notably the powerful local prosecutors — prison rights advocates have recently begun to argue that prison district politicians are more concerned about keeping the prisons full than about crime. The idea of counting inmates as voters in the counties that imprison them is particularly repulsive given that inmates are nearly always stripped of the right to vote. The practice recalls the early United States under slavery, when slaves were barred from voting but counted as three-fifths of a person for purposes of apportioning representation in Congress.

The Census Bureau’s method of counting prisoners reduces the population of Nevada’s urban areas and transfers political clout to rural districts, according to a report released last week by the Prison Policy Initiative, an organization that conducts research and advocacy on incarceration policy, and the Progressive Leadership Alliance of Nevada.

A little known quirk in the Census counts people in prison as if they were residents of the prison town. “This inflates the population of rural areas that host prisons, and shortchanges the areas most prisoners come from,” said report author Peter Wagner.

Nevada’s prison population grew five times larger from 1980 to 2000, which accentuates the problem. The biggest beneficiary of this Census counting practice is Pershing County, one of the 21 counties in the country that has at least 21% of its Census population in prison.

The largest losers are Reno and Las Vegas where most of the prisoners come from, and anyone who needs accurate statistics. For example, the Census reports that Pershing County more than doubled its Black population in the 1990s. But that is the prison population growing, not the actual residents of the county.

END_OF_DOCUMENT_TOKEN_TO_BE_REPLACED

As Rose Heyer and I wrote in Too Big to Ignore, How counting people in prisons distorted Census 2000, the Census Bureau’s decision to count incarcerated people as residents of the places with the prisons rather of their homes, leads to distorted data and some misleading conclusions about our communities. We wrote that statistics about size, growth, wealth, race, ethnicity and gender of communities are all affected.

Until recently, no online mapping tool existed to help you locate correctional facilities. The only two options were to hope that exactly what you needed has already been published on this website, or find the populations yourself in the particular tables of the text-based American Factfinder from the Census Bureau. Given the complexity of Census Bureau geography, this is complex task without the assistance of maps.

Bill Cooper of Fairdata2000 has added the various group quarters populations to his excellent online mapping tool for income, housing, language, and education statistics. The new tool allows researchers to look at counties or smaller levels of geography and see what percentage of the population consists of people in correctional facilities. He has also provided downloadable versions of this data to help other facilitate further analysis by more advanced users.

END_OF_DOCUMENT_TOKEN_TO_BE_REPLACED

Like most states, Idaho relies on U.S. Census data to draw its legislative districts. Districts are redrawn each decade so that each districts is of equal size. Having equal numbers of people in each legislative district ensures that each person in that district has an equal access to government. This concept is known as the “One Person One Vote” rule, but it breaks down when the U.S. Census data does not reflect the actual population of the state.

By Idaho statute, when a person is incarcerated his or her residence remains where he or she lived prior to incarceration: 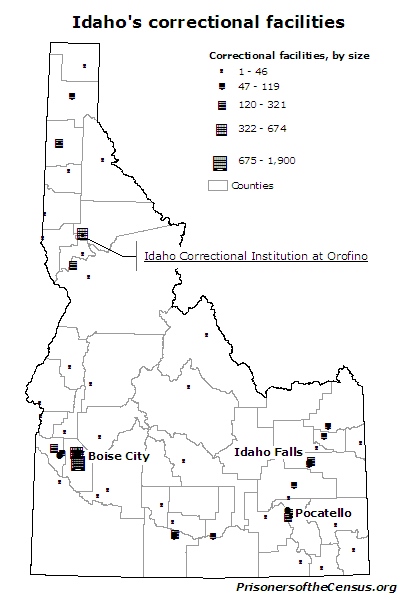 Almost 6% of Clearwater County’s Census population is incarcerated. It’s not the most punitive county in the state; it just happens to have a small population and the large Idaho Correctional Institution at Orofino filled with residents from other parts of Idaho.

“no person shall be deemed to have gained or lost a residence … while kept in any state institution at public expense.” Idaho Code § 34-405 (2003)

This can radically change how the Census Bureau portrays certain Idaho communities. For example, almost 6% of the population reported in the Census for Clearwater County consists of prisoners counted at the Idaho Correctional Institution at Orofino.