Historic election for “one person, one vote” in Maryland

Next Tuesday will mark the first state-wide election in which people vote from districts that count incarcerated people in the right place: at home.

On Tuesday, prison gerrymandering will dilute election votes cast for state- and local-level candidates across the nation. But, for the first time, Maryland voters won’t have to worry.

This is a big change for Marylanders: in previous state elections, every 4 voters in Delegate District 2B had as much political clout in state affairs as any 5 voters in every other district (see below map). That’s because 18% of the people officially counted in 2B were actually incarcerated people from other parts of the state. Maryland outlawed prison gerrymandering back in 2010 by passing the historic “No Representation Without Population Act.” This law required the state to count incarcerated people at their home addresses in the most recent round of district line-drawing.

Next Tuesday will mark the first state-wide election in which people vote from districts that count incarcerated people in the right place: at home. (And some local Maryland communities, such as Somerset County, are already reaping the benefits of being freed from prison gerrymandering.) Regardless of the outcome of Tuesday’s election, upholding the Supreme Court’s “one person, one vote” mandate is reason to celebrate. 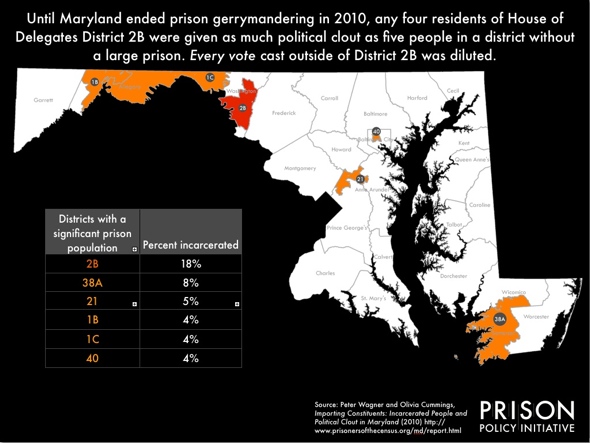