State legislators in Georgia are currently redrawing the districts of Georgia’s Congressional delegation, but by relying on Census data that counts prisoners as residents of the prison location, they are unwittingly diluting the votes of Georgia residents who do not live near prisons. 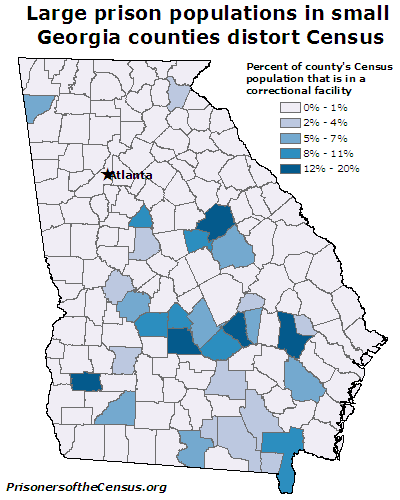 Census data is not a very accurate way to learn about a community when that community’s data contains large numbers of people from somewhere else.

Georgia has a relatively high incarceration rate, currently locking up more than one person for each group of 200 people. But many of the state’s prisons are located in sparsely populated areas, resulting in a significant distortion in how the Census portrays these communities. In ten Georgia counties, more than 10% of the county’s Census population is incarcerated. Twenty percent of Calhoun County is incarcerated. These are not the most punitive counties in the state, they just happen to be the places where the prisons are located. (See first map.)

Yet by relying on Census data that includes counts of prisoners at the facility location, Georgia’s legislators have drawn districts that are anything but exactly equal. According to my analysis of one of the competing plans, “CongressFair2”, the proposed District 12 in eastern Georgia contains as population more than 16,000 incarcerated people. By contrast, the proposed district 6 north of Atlanta includes as population only 196 incarcerated people. (See second map.) 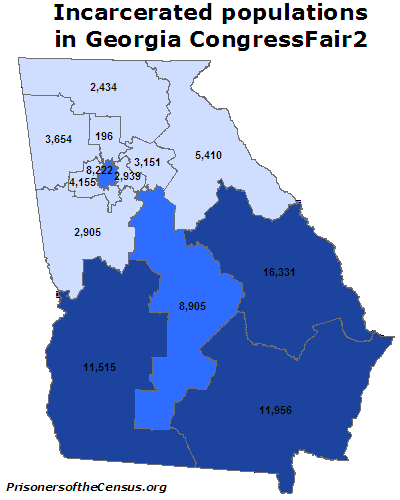 Georgia’s proposed new Congressional districts would each have equal resident populations if they weren’t based on Census data that counts prisoners as residents of the correctional facility’s location. Districts in the southern half of Georgia contain as many as 16,000 incarcerated people as “residents”.

Further research would be needed to determine exactly where the incarcerated people counted in each district came from, but this data suggests that the presence of the prisoners in District 12 makes a vote in that district worth 2.6% more than a vote in District 6. This is not what the Supreme Court had in mind when it established the One Person One Vote rule.

The legislators clearly tried to draw equally sized districts, as the largest district has only two people more than the smallest district. But while the Census as it is currently collected might be a good way to determine how many people are in a state, it is inadequate to determine where in the state the population actually resides. If Georgia’s legislators really want to draw districts that truly weigh all parts of the state equally, they need better data.

Either the Census Bureau needs to change how it counts prisoners, or states like Georgia need to find their own ways to count their population prior to redrawing district boundary lines. Otherwise, the geographic and racial disparities in our criminal justice system will continue to spill over into our electoral system.