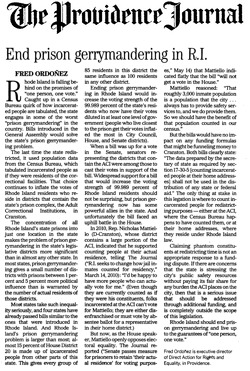 On Saturday, the Providence Journal published an op-ed by Fred Ordoñez, executive director of Direct Action for Rights and Equality, calling on Rhode Island to end prison gerrymandering.

The concentration of all Rhode Island’s state prisons into just one location in the state makes the problem of prison gerrymandering in the state’s legislative districts more significant than in almost any other state. In most states, prison gerrymandering gives a small number of districts with prisons between 1 percent and 5 percent more political influence than is warranted by the number of actual residents of those districts.

Most states take such inequality seriously, and four states have already passed bills similar to the ones that were introduced in Rhode Island. And Rhode Island’s prison gerrymandering problem is larger than most; almost 15 percent of House District 20 is made up of incarcerated people from other parts of this state. This gives every group of 85 residents in this district the same influence as 100 residents in any other district.

Ending prison gerrymandering in Rhode Island would increase the voting strength of the 99.989 percent of the state’s residents who now have their votes diluted in at least one level of government (people who live closest to the prison get their votes inflated the most in City Council, House, and Senate districts).

When a bill was up for a vote in the Senate, senators representing the districts that contain the ACI were among those to cast their votes in support of the bill. Widespread support for a bill that would increase the voting strength of 99.989 percent of Rhode Island residents should not be surprising, but prison gerrymandering now has some powerful allies in the state. And unfortunately the bill faced an uphill battle in the House.

Unfortunately, the same day the op-ed was published the bill to end prison gerrymandering in Rhode Island, S 2286A, died in the House’s Judiciary Committee. But given the enthusiasm in the Senate, I’m sure the bill will be reintroduced again next session.