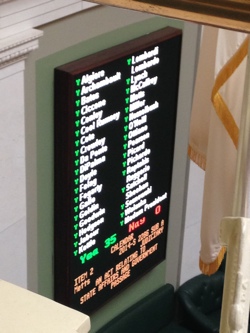 The bill would count incarcerated people at their home addresses for redistricting purposes. The last time the state redistricted, it used population data from the Census Bureau, which tabulated incarcerated people as if they were residents of the correctional facilities. That choice continues to inflate the votes of Rhode Island residents who reside in districts that contain the state’s prison complex, Adult Correctional Institutions (ACI). But voting equality won out last night when the Senators representing the districts that contain the ACI were among those to cast their votes in support of the bill.

Unfortunately the bill has an uphill battle coming up in the House, where the House Speaker, Representative Mattiello, is apparently opposed to electoral equality. The Providence Journal reported that Mattiello indicated that the bill “will not get a vote in the House.”

Mattiello’s comment was a dramatic reversal on his part given that in 2010 he supported counting people at their actual residence, saying: “I’d be happy to have more people who can actually vote for me.” (Folks incarcerated at the ACI can’t vote for Mattiello. They are either disenfranchised or must vote by absentee ballot for a representative in their home district.)

Stay tuned for updates as the bill heads to the House Judiciary Committee next.