The 2010 U.S. Census will determine more than just how many people live in a given regional area. Those numbers are also used when counties across the state of Alabama determine where district lines are drawn for government representation.

Escambia County makes determinations on those district lines based on actual residential population, unlike other counties that may use prison population as part of district residents.

Escambia County Administrator Tony Sanks said the population of prisons in the county is excluded when district lines are determined.

“The district lines in the county were redrawn in 2001 following the last Census,” Sanks said. “The prison count was not included when a determination was made on the number of residents living in a particular area were considered.”

Sanks said the reason for that is simple — prisons aren’t served by the county.

In my view, the ideal solution is for the Census Bureau to count incarcerated people at their home, not prison, addresses. But Escambia County’s solution is a good interim step that avoids giving some districts extra representation just because they happen to contain a large prison.

Read the rest of the article. 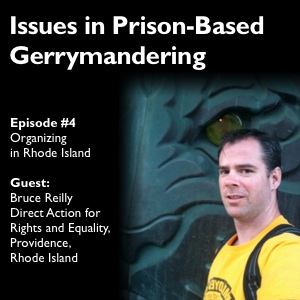 Welcome to Issues in Prison-Based Gerrymandering, a podcast about keeping the Census Bureau’s prison count from harming our democracy. The Census Bureau counts people in prison as if they were actual residents of their prison cells, even though most state laws say that people in prison are residents of their homes. When prison counts are used to pad legislative districts, the weight of a vote starts to differ. If you live next to a large prison, your vote is worth more than one cast in a district without prisons. Prison-based gerrymandering distorts state legislative districts and has been known to create county legislative districts that contain more prisoners than voters. On each episode, we’ll talk with different voting rights experts about ways in which state and local governments can change the census and avoid prison-based gerrymandering.

Our guest today is Bruce Riley, an organizer at DARE in Rhode Island, Direct Action for Rights and Equality. Bruce has been spearheading the campaign to end prison-based gerrymandering in Rhode Island. Welcome, Bruce.
END_OF_DOCUMENT_TOKEN_TO_BE_REPLACED

Where should inmates be counted for redistricting?

The Texas House Research Organization has a lengthy article that cites a lot of our Texas research on prison-based gerrymandering.

Tom Howe has has a lengthy article Where should inmates be counted for redistricting? in the Texas House Research Organizations’ Interim News.

The article cites a lot of our research, including:

“An End to Prison Gerrymandering” The New York Times cites our research on prison-based gerrymandering in the New York Senate, in upstate counties, and in Rome, New York in an editorial in Monday’s paper, An End to Prison Gerrymandering.

The editorial hails New York State’s new law to end prison-based gerrymandering and says it should be emulated around the country.

Letter to the editor explains what Senator Griffo and others are ignoring.

The Watertown Daily Times prints my letter to the editor where I explain that the state Legislature’s decision to count incarcerated people at home for redistricting purposes has a big upside for St. Lawrence and Jefferson counties that nobody is talking about.

How much money is New York City going to gain from new law counting prisoners at home?

None. The new law applies to state and local redistricting, not funding.

Even if the Census Bureau were to, in the future, count incarcerated people at their home addresses, we’ve long explained that virtually every federal and state funding formula is too smart to be fooled by prison populations. Despite assumptions to the contrary, there is very little impact from the prison miscount on funding in general.

If money is not at stake, why did 3 states pledge to count incarcerated people at home for redistricting purposes? Because those states want to ensure that legislative districts are drawn fairly, and that no district gets undue influence just because it contains a large correctional facility.

That is reason enough.

Even small prisons can mean a big problem for democracy

City of Hudson used prison population to give the residents of Ward 3 about 35% more clout than their actual population warranted.

The residents of the City of Hudson will benefit from New York State’s new law that will end the practice of prison-based gerrymandering.

Hudson, in Columbia County, has a city council form of government that attempts to comply with the Supreme Court’s “one person, one vote” requirement by using a system of weighted voting. Rather than redraw districts each decade to ensure that each district has the same population, the city keeps the same wards but changes the number of votes exercised by each City Alderman. By keeping the votes proportional to population, each resident has the same access to government.

The problem for Hudson is that the U.S. Census data used to weight the City Aldermen’s votes is flawed. Instead of counting incarcerated people at their home addresses as required by the state constitution’s definition of residence, the city used data that included the Hudson Correctional Facility as part of the city’s population.

The last Census in 2000 credited 618 incarcerated people to the 3rd Ward in Hudson, giving the actual residents of that district about 35% more clout than they were entitled to, and diluting the votes of residents of the other wards by about as much.

In 2010, the prison population has fallen to about 360, but even relatively small populations can have a large impact on democracy if they are counted in the wrong place. New York’s new law ending prison-based gerrymandering gets a lot of attention for its comparatively small impact on the state senate, but the law’s amendments to the municipal home rule law will ensure that the law is a big advance for democracy upstate.

Ed Fitzpatrick finds that prison-based gerrymandering is not unique to Iowa. Another clear example is right in his home state.

He said that my explanation of “the perfect district from the perspective of an elected official would be your house and a large prison, because as long as your spouse is willing to vote for you, you are guaranteed reelection” made him laugh, but he “wrote it off as an Iowa issue.” Then he started to think about the large Adult Correctional Institution in Cranston Rhode Island.

Anamosa is a great example of why prison-based gerrymandering is an unfair practice. But if viewers expect to see elected officials boast of deliberately using the prison populations to receive more representation than elsewhere, you won’t find it in Anamosa where democracy activists and the representative of the prison district worked together to change the form of government to eliminate the prison district. For shameless examples of using prison populations for self-advancement, the best example is in Rhode Island.

To find out who in Rhode Island inspired a search for a place like Anamosa, check out Ed Fitzpatrick’s column. You can also watch the segment of the film below. The film will be out in select theaters nationwide on October 15, and in more cities after that. Stay tuned!

Census Data May Be a Big Concern for Georgia County Commissioners

Some Georgia counties and municipalities already ended the practice of prison-based gerrymandering within their own boarders.

As the release date of the 2010 Census data gets closer, the process of redistricting will begin across Georgia. Like many other states, Georgia redistricting officials rely primarily on the accuracy of Census data to draw fair county commission district boundaries. But despite the Census’ goal of counting everyone once, only once, and in the right place in order to ensure equal representation, the data will fail to meet this standard for 81,000 of Georgia’s residents- those who are behind bars.

The Census Bureau counts people who are imprisoned as residents of the place at which the prison is located, not at their residential addresses. Georgia Annotated Code § 21-2-217(3), however, states that involuntary and temporary movement to a new county does not change a person’s residence. Since incarcerated people do not voluntarily or permanently move to correctional facilities, they are not changing residences. Despite this fact, nearly half of Georgia counties with large prisons continue to base districts on the Census Bureau’s faulty method of counting incarcerated people as residents.

When incarcerated people are counted as residents for the purpose of drawing district boundaries, a class of phantom constituents is created because incarcerated individuals are not part of the local community and they do not have the right to vote. These phantom constituents are used to pad some districts, while all other districts need actual residents to meet population requirements. This skews the democratic process by effectively diluting the voting power of everyone in the county who does not have a prison in their district.

In the 2000 Census, for example, 11% of the population counted in Baldwin County was incarcerated in multiple correctional facilities. Most of the facilities were located in Commissioner District 4. Because Baldwin County included the prison population when drawing its district boundaries, it inadvertently created a district in which 37% of the people were incarcerated, giving the actual residents of District 4 substantially more representation than other residents. (Additionally, 17% of Commissioner District 2 is comprised of incarcerated people from the since closed Scott State Prison.)

END_OF_DOCUMENT_TOKEN_TO_BE_REPLACED

Reactions from politicians who want to claim phantom constituents, despite constitutional definition of residence for incarcerated people.

The Governor of New York signed the budget on Thursday, and with it the state’s new law to end prison-based gerrymandering.

Keith Goldberg of the Times Herald-Record (Orange County, NY), which earlier this week editorialized in support of the new law, has an interesting article about their state Senator’s reaction:

And the Associated Press has an article appearing around the state that’s pretty good pointing out that the “last redistricting map included seven Senate districts that met required population criteria – within 10 percent of the largest district – only by counting prisoners,” although we wish it would have been more thorough at dealing with the constitutional issues. When Sen. Nozzolio “called the change ‘a direct assault’ on New York’s Constitution, he conveniently disregarded Article II, § 4, where it says that while incarcerated, a person remains a resident of their home.