An Atlanta Journal Constitution article creates an urban-rural conflict over an illusory funding fight from how incarcerated people are counted in the Census.

An unfortunate article in the Atlanta Journal Constitution creates an urban-rural conflict over an illusory funding fight from how incarcerated people are counted in the Census.

The Census Bureau counts people in prison as residents of the correctional facility, even though they can’t vote and remain legal residents of their homes. When state and county legislatures use prison counts to draw legislative districts, they unintentionally pad the legislative districts that contain prisons and dilute the weight of votes cast in all other districts. Notwithstanding the Census Bureau’s overly simplistic rhetoric, there is very little financial impact from where people in prison are counted in the Census.

Nearly one of every four people in Calhoun County sits behind bars. They can’t vote, check out a library book or drive county-maintained roads.

But they can bring the southwest Georgia county a lot of federal money while bolstering the community’s political clout….

Rural Georgia’s gain is urban Georgia’s pain: Financially strapped cities want their fair share of $450 billion dispensed annually by Washington, particularly in a recession when budgets are tight. The money, based largely on census counts, pays for roads, Medicaid, lunch programs and other federal programs.

Actually, much of the so-called “population-based” aid is not distributed directly to local areas, and most government aid formulas are too sophisticated to be fooled by where people in prison are counted. Medicaid reimbursements and federal highway funds are block grants to states, so it doesn’t matter where in a state a prisoner is counted as long as he is counted in the correct state. Federal poverty programs are based in part of Census calculations of poverty, which by definition exclude prison and other group quarters populations. The federal program that subsidizes school lunch programs is even more sophisticated, looking only at the number of children in poverty. In short, Calhoun County is not getting rich from the Census Bureau’s prison count.

The vice-Chairman of the Calhoun County Commission says as much:

“The prison does cost our county some money and some wear, tear and stress,” said Richard West, vice chairman of the Calhoun County Commission. “There are some pluses and minuses both ways. But it all comes out in the wash.”

Some of the negatives of hosting a prison would be better addressed by payments in lieu of taxes and other systems, but he’s clearly not saying that the Census is a huge source of income.

What matters in a county like Calhoun is not the census, but jobs:

“We’ve got agriculture and we’ve got the prison. We’ve got no other industrial activities,” said West, who owns the IGA in nearby Edison. “And there’s 300 jobs in this county that wouldn’t be there if the prison wasn’t here. We need those jobs.”

So while the facts do not support the popular conception that counties with prisons are receiving poverty assistance because of the prison, I don’t blame the vice-Chairman for not looking for reasons to reduce services in the county:

West isn’t bothered that the prisoners, who require very little by way of county services, pad Calhoun’s federal payments. Poor counties, he reckons, deserve all the help they can get.

Rural poverty is very real. In 2000, almost 27% of Calhoun County was in poverty. (Recall that prisoners are NOT included in the poverty calculations. Poverty statistics include only the people living in households.) The county benefits from 300 jobs at the prison and it still has one of the highest poverty rates in the state.) Urban Atlanta, by contrast, had a poverty rate under 16%, and Dekalb County’s poverty rate was under 11%. I know that urban Atlanta would like more anti-poverty funding, but fighting with rural Georgia over illusory sources of money won’t help anyone.

So what matters about the Census Bureau’s prison miscount? Democracy.

After each census, local and state officials trek to the State Capitol to redraw legislative districts. By counting prisoners, Wagner says, county commission and state House and Senate districts can be unfairly padded with constituents who can’t vote. Federal law requires that all districts be based on equal population so that each constituent has the same access to, and representation in, his or her government.

Under Georgia law, a prison cell is not a residence because a residence must be chosen voluntarily. Padding Calhoun County’s population with people who are residents of other parts of the state benefits the county in the state legislature, but far less than the article says:

Calhoun County voters, therefore, have 25 percent more power than voters in similar-size legislative districts that don’t have a prison. In other words, it pays … to live near a prison.

While about 25% of Calhoun County’s population in the Census is incarcerated and the county looks to be 25% larger than it really is, the county must share the 149th House district with 5 additional counties that do not contain prisons. The net enhancement to each vote cast in that district is about 3%. That is a significant vote enhancement, but it’s far smaller than the 11% vote enhancement given to district 141 near Milledgeville. As a result, all voters who are not in district 141 see their votes diluted on state issues. That’s not fair, to the voters of Calhoun County or voters in any other part of the state. 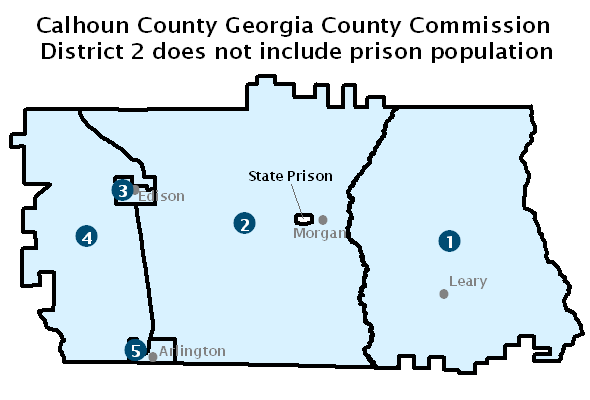 The state of Georgia should follow the lead of Maryland and develop a system to adjust the data used for redistricting to count people in prison at their home addresses. But at the very least the state of Georgia should do state-wide what the city of Milledgeville and the counties of Calhoun, Dooly, Macon, Tattnall, Telfair and Wilcox do: reject the Census Bureau’s prison miscount. For redistricting purposes, assign prisoners to an unknown address so that they do not affect the redistricting formulas. Some voters should not get extra influence just because they happen to live next to a large prison.

Calhoun County has the right idea.