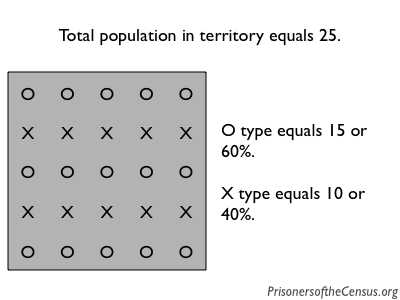 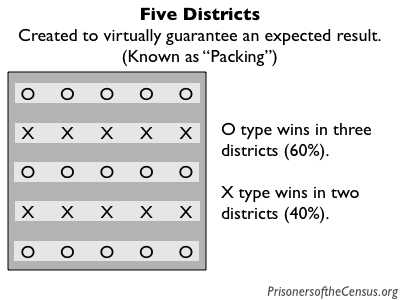 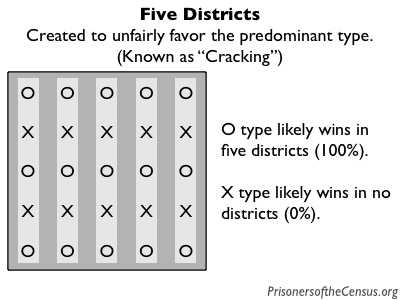 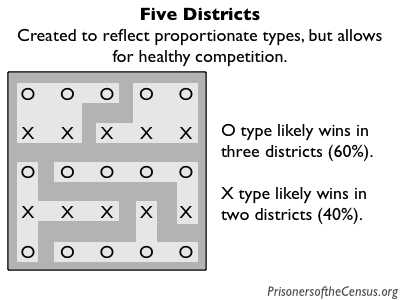 For this exercise, we’ll use an imaginary territory with 25 residents, 15 “O” voters and 10 “X” voters. (See top image.) (You can assign the X’s and O’s political parties, if that makes it easier.)

In a territory-wide race for Governor or Mayor where the whole territory participates, the candidate backed by the O’s would probably win. But what about elections for a five-seat legislature, where each legislator represents an individual district with one-fifth of the territory’s population? The answer depends on how the districts are divided.

In real life, district boundary lines are redrawn after each federal Census, usually by the political party with majority power. Our example assumes that a Census has just taken place.

The remaining images on this page illustrate three possible ways to divide the districts and their resulting outcomes. Compare the next two images, labeled “Packing” and “Cracking.” The differences in the district boundaries appear subtle, but results are radically different. The final image reflects a fairer way to draw the districts: there is still an “O” majority, but the X’s and O’s are proportionally represented throughout the territory.

In real life, political and ethnic populations are not evenly distributed throughout a territory. In addition, legislators have considerable flexibility in how the boundary lines can be drawn. For example, legislators have some discretion to make districts deviate slightly from population requirements. This deviation from the principle of strict population equality makes additional outcomes possible.

Furthermore, when the underlying Census data is faulty — for example, data that counts tens of thousands of urban prisoners in rural towns – redistricting is even less likely to result in a democratic reflection of the territory.

For how changes in district size can effect outcomes in other electoral districts, see Hanging in the Balance about New York State Senate district 34, which straddles the border of NYC’s Bronx county and Westchester county in such a way as to use Bronx residents to create a Westchester district.

WXXI (Rochester, NY) and NYCitizens.org has a complex Redistricting Imaginary State Simulation where you can balance racial/ethnic factors against political affiliations for a variety of results. The website is a role playing exercise where you can be an advocate for a certain interest group and experiment with how to best meet “your” objective.

This article is inspired by and draws some text from the Center for Voting and Democracy’s interactive Redistricting Wheel, created by Matthew Pierce. Any mistakes on this page are ours. We welcome feedback.

See our Resources page for more information about redistricting and the census generally.