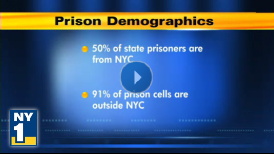 Many of the leaders of redistricting and prison-based gerrymandering reform are cited in the series including Senator Schneiderman, Assemblyperson Jeffries, Susan Lerner of Common Cause, Dick Dadey of Citizen’s Union and Myrna Perez of the Brennan Center for Justice. Each segment is about 2 minutes long.