State legislatures, members of Congress, and national newspapers push for an end to prison gerrymandering in 2021

A New York Times editorial, a federal bill, and other encouraging updates from our fight to make sure incarcerated people are counted in the right place.

This week, the Editorial Board of The New York Times called on states and the federal government to end prison gerrymandering, the practice of drawing legislative districts around large prisons and counting the people inside as legitimate constituents. As the Editorial Board remarked, this practice

“makes no sense, because virtually everyone who goes to prison comes from somewhere else, and almost all will return there after being released. While they are behind bars, they can’t vote, nor do they have any attachment to the local community or its elected officials…The result is one of the more persistent and pernicious distortions in the redistricting process.” 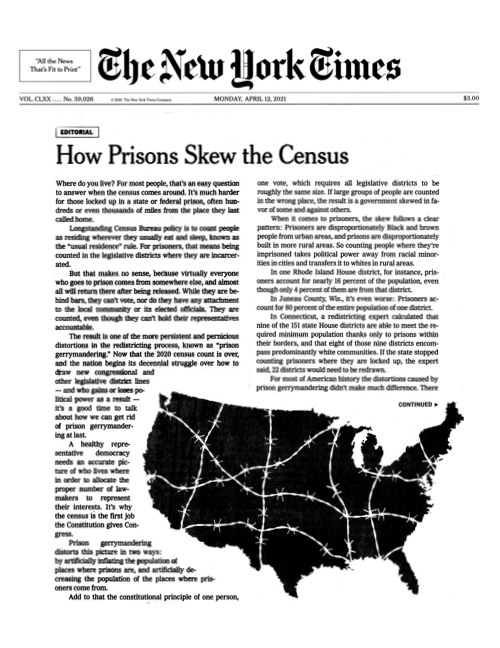 The bad news is that with redistricting just around the corner, policymakers are running out of time to prevent another 10 years of prison-driven election distortion. The good news is that momentum is rapidly building to fix the problem in several local, state, and federal lawmaking bodies, as well as in the national media:

If you live in a state that still hasn’t taken action, you may wonder what the options are for ending prison gerrymandering where you live this year. Again, there is good news and bad news. Most states have run out of time to introduce new bills this year that would take effect before the 2021 redistricting process begins. But all states still have time to limit prison gerrymandering this year through non-legislative means (the solution described in the fourth bullet above). And the stakes have never been higher. In the words of the Times Editorial Board: “A healthy representative democracy needs an accurate picture of who lives where in order to allocate the proper number of lawmakers to represent their interests.”

Learn more about what your state is doing to end prison gerrymandering at https://www.prisonersofthecensus.org/action.html.