Home Page > Blog > New Boston Globe oped explains how and why states must...

Advocates will find Abdallah Fayyad’s new Boston Globe column a useful article to distribute to policymakers, as a concise explainer about why ending prison gerrymandering is important this year.

Prison gerrymandering is poised to continue in most states for another 10 years, unless states act immediately to fix the problem before the fast-approaching redistricting process. Fortunately, even in the many states that have run out of time to pass new laws before redistricting starts, there are still two solutions left for local and state districts. 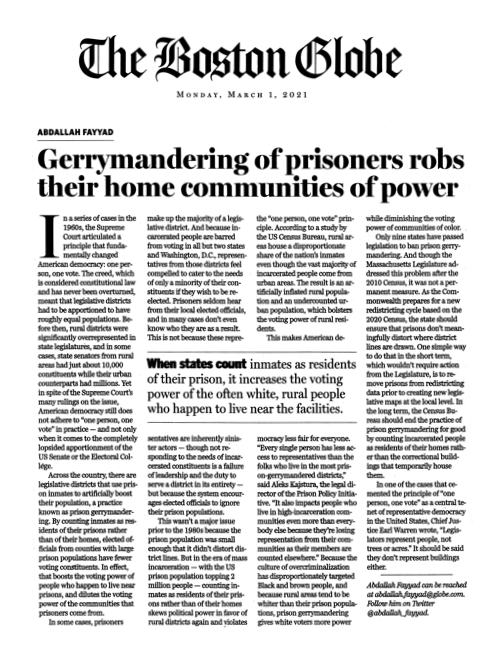 Boston Globe opinion columnist Abdallah Fayyad published a highly-readable oped this month about prison gerrymandering, in which he explains the problem and the urgently-needed solution for local governments: “Remove prisons from redistricting data prior to creating new legislative maps at the local level.”

Meanwhile, state legislators “should ensure that prisons don’t meaningfully distort where [state] district lines are drawn.” This requires map drafters to avoid grouping prisons together into single districts and making sure that districts that do contain prisons have enough actual local residents to meet population requirements.

Fayyad’s oped targets policymakers in Massachusetts, but the solution he explains could work in virtually any state. Most states contain cities and counties whose governments have been wildly distorted by prison gerrymandering, and the Census Bureau is making it easier than ever for redistricting officials to fix the problem themselves. (We’ve previously explained the solution Fayyad offers in more detail.)

Because the oped ran in the widely-read and respected Boston Globe, advocates in other states may find this a very useful piece to distribute as a concise explainer about ending prison gerrymandering this year.

Fayyad also does an excellent job explaining the injustice of prison gerrymandering. As he puts it:

“Representatives from [prison] districts feel compelled to cater to the needs of only a minority of their constituents if they wish to be re-elected…This is not because these representatives are inherently sinister actors — though not responding to the needs of incarcerated constituents is a failure of leadership and the duty to serve a district in its entirety — but because the system encourages elected officials to ignore their prison populations.”

It’s important to end prison gerrymandering, as Fayyad explains, in order to move away from a system in which people in prison are invisible and ignored, and towards one in which they have genuine representation in houses of government.

Read about our ongoing advocacy to end prison gerrymandering in 2021 here: https://www.prisonersofthecensus.org/news/2020/12/18/building-momentum/