This afternoon in Oregon, the state’s Senate Committee on Rules will hold a work session that will include a discussion of SB 331, a bill to end prison gerrymandering.

The committee has already received testimony supporting the bill from numerous organizations when it held a public hearing earlier this month.

Several people also testified in person, including two of the bill’s sponsors, with Senator Shields pointing out that “since we’ve a little bit of distance between redistricting this might be the exact opportune time to take this on”. I hope the committee agrees. 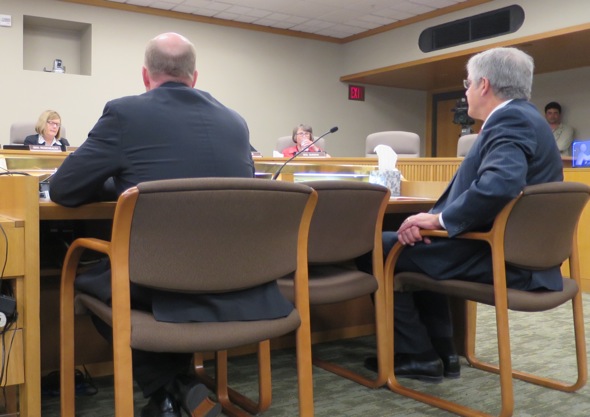 I’m happy to report that McAlester, Oklahoma has finally solved the prison gerrymandering problem it stumbled into last decade. It may have taken the City a while, but it’s certainly not for their lack of trying.

The City used to exclude prison populations when redistricting, but a mid-decade charter revision accidentally tied their hands when the 2010 round of redistricting rolled around. The new charter language — based on the model charter published by the National Civic League — pegged McAlester’s redistricting data to population data “according to the most recent Census”, which of course tabulated people incarcerated at the two state correctional facilities in town as if they were actual residents of McAlester. This resulted in the city feeling forced into drawing a district where people incarcerated by the state accounted for nearly 60% of the population. This means that McAlester residents who live in that city council district get more than twice as much representation on the city council as any other city resident.

Last summer McAlester was poised to fix the charter, and those who voted overwhelmingly approved the charter change in August, but that too didn’t last. A legal fault was discovered with the published election notice, and a new vote was needed.

And so we arrive at March of 2015, when the residents of McAlester
voted once again to finally end prison gerrymandering. And that’s great news, for McAlester. But there are many cities that lack McAlester’s persistent pursuit of equal representation. And quite frankly, America’s cities should not be put in a position where they have to question Census data’s suitability for redistricting.

On Monday, the American Civil Liberties Union (ACLU) of Florida filed a federal lawsuit challenging an election system in Jefferson County, Florida, which counts the state prison population in the drawing of district maps. The complaint argues that the 2013 Redistricting Plan violates the “one person, one vote” standard of the 14th Amendment.

For more information, read the ACLU’s press release. And check out the Florida page of our 2010 report to learn more about the negative impact of prison gerrymandering in Florida, on both the local and state levels.

Rhode Island Senate passes bill to end prison gerrymandering. House to take the issue up by end of March.

Last night, the Rhode Island Senate passed a bill (S0239) to end prison gerrymandering. As it did last year, the bill passed unanimously (33-0) with bipartisan support.

The bill is similar to those already passed in California, Delaware, New York, and Maryland; the Rhode Island bill proposes to adjust population data published by the Census Bureau in order to count incarcerated people at their home address for Rhode Island’s state and local redistricting. Until the Census Bureau makes the change (as local, state, and Congressional legislators, and over 200 organizations have explicitly urged it to do), it’s up to each state to correct the redistricting data themselves.

We expect the House version of the bill (H 5155) to be considered in the House Judiciary committee by the end of March. Stay tuned for the exact date.