In the decade that we’ve been working with state and local governments to document the extent of, and develop solutions to, the problem of prison gerrymandering, we’ve noticed a strong trend that makes a lot of sense: the bigger the potential problem, the more likely a jurisdiction is to address it. It should therefore come as no surprise that more than 200 communities across the country currently reject prison gerrymandering as seen here: We’re currently working on a detailed 50-state overview of how local governments deal with prison gerrymandering. But our results for Texas and Louisiana are so clear that I wanted to share them now as a preview. This post summarizes how Texas and Louisiana counties, parishes, municipalities and school districts that contain large prisons addressed the Census Bureau’s inclusions of thousands of non-voting non-residents as part of their community.

I choose Texas and Louisiana for this research summary for two reasons: because both states contain a large number of jurisdictions where prison gerrymandering is potentially an issue, and because, like in most states, those local governments are entirely free to choose whether or not to rely without question on the Census Bureau’s data when redistricting.

Adjusting the Census to draw districts without the prison population isn’t just common sense, it also has a basis in how state laws defines residence. In these two states, for example:

“For purposes of the laws governing voter registration and voting, ‘resident’ means a citizen who resides in this state and in the parish, municipality, if any, and precinct in which he offers to register and vote, with an intention to reside there indefinitely.” (Louisiana Annotated Revised Statutes S 18:101(B).)

“‘[R]esidence’ means domicile, that is, one’s home and fixed place of habitation to which one intends to return after any temporary absence…. A person who is an inmate in a penal institution… does not, while an inmate, acquire residence at the place where the institution is located.” (Texas Annotated Code S1.015(e).)

In fact, once local governments engage the problem of prison gerrymandering, they often show great enthusiasm for comprehensive state-wide solutions. Connecting these rural leaders with their state legislators is often the key to the rural-urban state legislative coalition for reform.

As the below scatterplot of our research findings shows, the more dramatically the Census Bureau’s prison counts threaten to undermine a jurisdiction’s electoral districts, the more likely the place is to exclude those counts when redistricting: 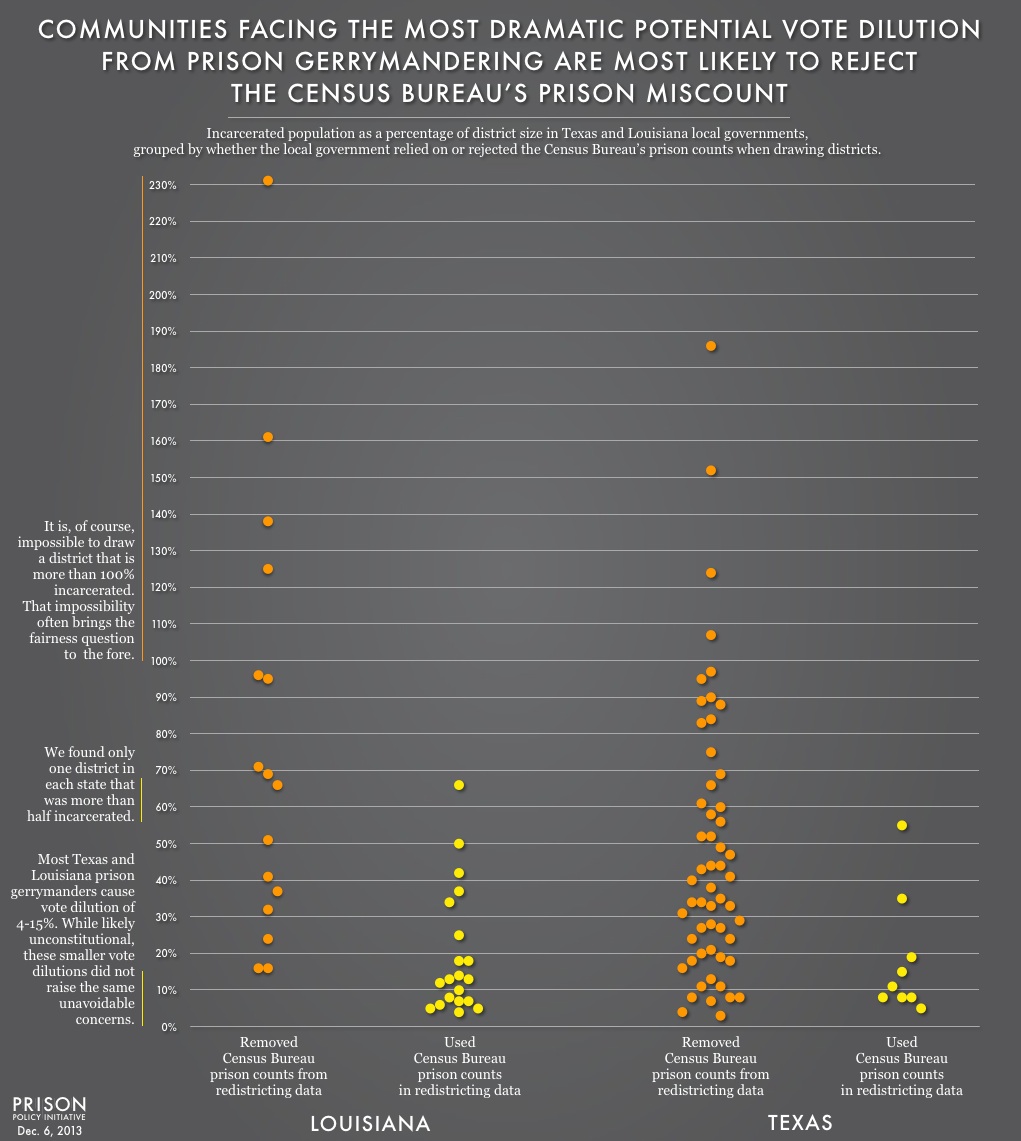 Of course, there are always exceptions to any rule. Stay tuned for my law review article that will address the notable exceptions and link them to unique but unfortunate constitutional clauses, state statutory language or city charters that require local governments to use knowingly false data and dilute the votes of their own residents. Those exceptions are interesting and speak to why the ultimate solution needs to come from the Census Bureau. But the data we’ve summarized makes the trend really clear.