We are hiring a Development and Communications Associate. Apply today.

We joined our colleagues in partner organizations to urge the Massachusetts Legislature to take a stand for electoral fairness by urging the Census Bureau to end prison gerrymandering.

The message is loud and clear: Massachusetts wants to see an end to prison gerrymandering.

Yesterday afternoon Prison Policy Initiative Legal Director Aleks Kajstura and I attended a hearing before the Massachusetts Legislature’s Joint Committee on Election Laws to testify with a great group of colleagues in support of Resolution S 309/H 3185, a resolution urging the Census Bureau to end prison gerrymandering by counting incarcerated people at their home addresses.

Representative Jim O’Day kicked off the testimony in support of the resolution, explaining why it’s important that the people who are incarcerated in his district be counted at their home addresses in the next Census. Aleks spoke and submitted joint testimony on behalf of Prison Policy Initiative and Dēmos, and she was joined by Pam Wilmot of Common Cause Massachusetts, Professor Carroy Ferguson of UMass Boston, Kevin Peterson of the New Democracy Coalition, Marinella Blake of EPOCA, Sunni Ali of the Boston Workers’ Alliance, Rahsaan Hall of the Lawyers’ Committee for Civil Rights and Economic Justice, Sara Brady from MassVOTE, and Gavi Wolfe from the ACLU of Massachusetts (testimony).

The Census Bureau considers state and local redistricting to be the second most important use of census data, and actively solicits feedback from states on their experiences using Census data for reapportionment. The Massachusetts Legislature’s opinion on this matter carries great weight with the Census Bureau, so we urge you to pass Resolution S 309/H 3185.

As always, we’ll keep you posted with this blog and our Massachusetts organizing page as soon as updates are available! 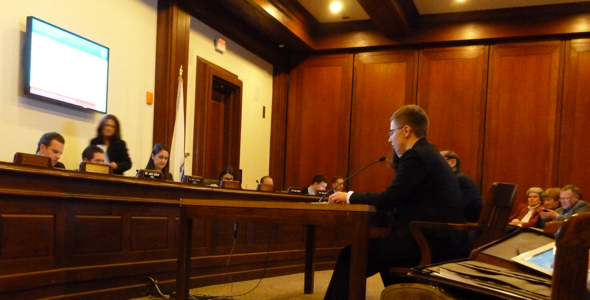