Is a piece of land containing a prison on a dusty piece of highway really an urban area? The Census Bureau doesn’t think so. Anymore.

About three miles north of Calipatria, California, the state of California operates the Calipatria State Prison. Based upon the 2000 census, the United States Census Bureau classified “Calipatria North, California” as an “Urban Cluster” with a population of 3,176. But is a piece of land containing a prison on a dusty piece of highway really an urban area? I don’t think so, and the Census Bureau doesn’t think so either. Anymore. 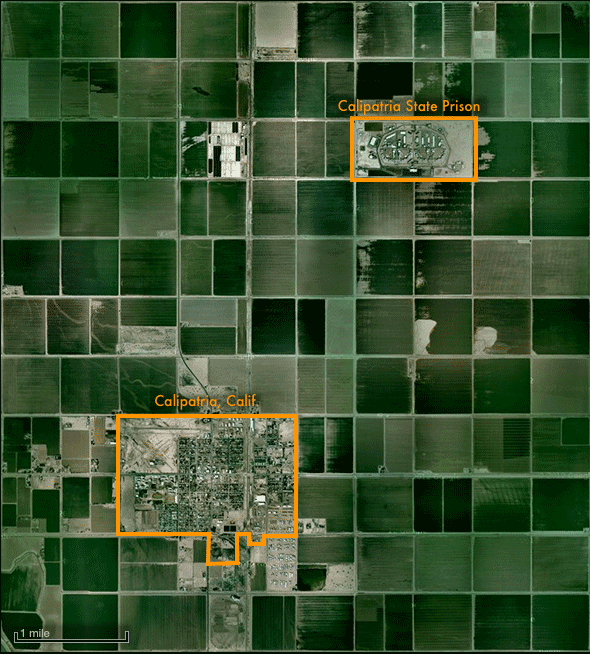 Recently, the Census Bureau released the list of “Urbanized Areas” and “Urban Clusters” that were classified as urban based on the 2010 census data. This new list incorporated a quirky but important change that the Census Bureau finalized in 2011. Specifically, the Census Bureau no longer labels an area “urban” if the majority of the population counted there is institutionalized in a prison, mental hospital or similar group quarters facility.

I discovered this quirk – and the pending change – during my Alternative Spring Break internship at the Prison Policy Initiative last year. I was investigating an Arkansas highway funding formula that, in part, gave extra funding to counties that had a large portion of their population classified as “rural.” This formula made a lot of sense, as rural populations are more spread out, so there would presumably be more roads per capita to maintain. Unfortunately for rural Arkansas counties, classifying prisons as “urban” made the counties that hosted prisons seem more urban than they actually were.

While most of our work at Prison Policy Initiative addresses prison-based gerrymandering, this urban classification problem is just one of many examples we’ve come across of how the Census Bureau’s policy of counting incarcerated persons at the location of prisons can distort governmental decision-making that relies on accurate portrayals of communities.

To the Census Bureau’s credit, it changed the way it classifies areas as “Urban Clusters” to avoid this problem. In reviewing the 2000 data, the Census Bureau acknowledged that twenty-four “Urban Clusters” from the 2000 census data were comprised “entirely or predominantly” of residents in institutional group quarters (cite: 75 FR 52178-79). Realizing that such areas “lack most of the residential, commercial, and infrastructure characteristics typically associated with urban territory,” the Census Bureau proposed that an Urban Cluster meet two requirements: that the area contain at least 2,500 people and that at least 1,500 of those persons be outside of institutional group quarters. In 2011, the Census Bureau finalized this proposal, and reiterated that persons counted in institutional group quarters lack the residential and commercial characteristics associated with the surrounding community (cite: 76 FR 53036). In other words, it’s a mistake to classify big prisons in the same way as urban communities.

While this an admittedly minor rule change, the Census Bureau’s rationale for the change is noteworthy. The Census Bureau acknowledged that institutional group quarters populations, many of which are incarcerated, lack sufficient connections to the surrounding community to justify their unrestricted use for census data purposes. Moreover, the Census Bureau implemented a reasonable correction to this particular problem caused by counting incarcerated persons as residents of the prisons in which they are incarcerated.