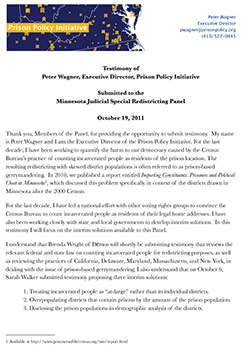 The members of the Minnesota Judicial Special Redistricting Panel have been traveling the state to gather public input about the state’s redistricting process. One of the critical questions they must consider in the current redistricting cycle is how to address the Census’s prison miscount, argued experts including the Prison Policy Initiative.

Ten years ago, the legislature used the Census Bureau’s prison counts to draw the districts, giving more influence to the districts that hosted the prisons and diluting the votes of every resident in every other district. The urban, African American and Native American communities that a disproportionate number of the people in prison call home pay an even higher price. This year, the Minnesota Judicial Special Redistricting Panel has a unique opportunity to right this wrong.

The Prison Policy Initiative, Dēmos, and the Minnesota Second Chance Coalition all recently submitted testimony to the Minnesota Judicial Special Redistricting Panel, urging them to lessen the harm of prison-based gerrymandering in Minnesota. In her testimony, Brenda Wright of Dēmos explains three different solutions that the Panel could choose:

If the Minnesota Judicial Special Redistricting Panel chooses to implement any of these solutions, it would both fix a flaw that undermines the state’s democracy, and bring the redistricting process in line with the Minnesota Constitutional Clause that unambiguously states that the condition of being incarcerated does not change a person’s residence:

As Sarah Walker of the Minnesota Second Chance Coalition pointed out in her testimony to the Panel, Minnesota should act now to implement a timely solution. But in the long run, she explains, Minnesota should follow the lead of states like Maryland, New York, Delaware, or California, and enact statewide legislation to ensure that this redistricting cycle is the last one in which Minnesota will have to address the issue of prison-based gerrymandering.