PPI and six other civil rights advocacy organizations submitted letter to LATFOR demanding that it comply with NY anti-gerrymandering law.

The Prison Policy Initiative and six other civil rights advocacy organizations have just submitted a joint letter to the New York Legislative Task Force on Demographic Research and Reapportionment (LATFOR) demanding that it comply with New York’s 2010 law (Part XX) that ended prison-based gerrymandering. Earlier this month LATFOR announced that it plans to simply ignore the law due to a current lawsuit seeking to revert to the old method of unfairly counting incarcerated people where they are imprisoned. 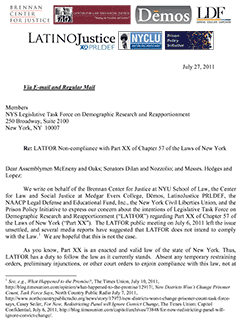 Failure to comply promptly with the law’s requirement that incarcerated persons be reallocated for purposes of redistricting would be a serious violation of legal obligations. It would also gravely infringe upon the voting rights of New York’s citizens for which you could be held accountable.

We understand LATFOR has already received from DOCCS the information needed to make the reallocation required by Part XX and redraw the district lines accordingly. We respectfully insist you to do so immediately.

The New York Daily News has already covered this latest development in the fight to keep prison-based gerrymandering out of New York.