On Monday (March 21), state and national leaders testified before the Connecticut General Assembly’s Joint Committee on Judiciary at a hearing on HB6606, An Act Concerning the Determination of the Residence of Incarcerated Persons for Purposes of Legislative Redistricting. 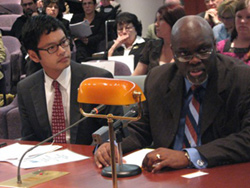 Rep. Stallworth, right, with Dale Ho of the NAACP LDF. Photo: Only in Bridgeport

Rep. Charlie L. Stallworth (D-126th Assembly District – Bridgeport) testified about the impact of disproportionate representation has on Bridgeport and other similar communities in Connecticut. Rep. Stallworth notes that when inmates and their families seek support, they reach out to their home communities’ legislators.

The New Haven Register also noted the inconsistency the current redistricting practices have with the way that representatives are actually elected:

In Connecticut, incarcerated felons lose the right to vote but individuals may continue to vote by absentee ballot if they are detained prior to a trial because they have not posted bail or if they have been convicted of a misdemeanor.

Their vote is counted in their home town elections.

Susan Pease, Dean of Arts and Sciences at Central Connecticut State University and a Board Member of Common Cause in Connecticut brought the Committee’s attention to the state’s commitment to equality:

“Each Connecticut resident should be represented equally in the political process, and the power of their voice should not depend upon whether they live near a prison.”

Even legislators with large prisons in their districts saw the inequity of the situation described to them over the course of the day. The CT Mirror reported:

Sen. John Kissel, R-Enfield, the ranking Republican on the committee, seemed to listen more closely than other legislators. His 7th Senatorial District includes a half-dozen prisons in Enfield, Suffield and Somers.

Kissel said about 8,000 residents of the district are inmates….

Kissel said he is considering supporting legislation that would count the prisoners in the towns where they came from.

“My gut tells me it has some merit,” he said.

Full text of these and other submitted written testimonies is available on our Connecticut campaign page.