As this week’s news coverage has emphasized, the Republican National Convention is being held in strongly Democratic New York City. While the presence of thousands of high-profile Republicans will not directly affect future New York elections, another temporary transfer of population might.

New York City is not just the host of the Republican National Convention, it’s the actual home of the majority of the state’s prisoners. I have previously reported that 65% of New York State’s prisoners come from the city, but 91% of the prison cells are upstate.

While the media coverage recognizes that large numbers of Republicans from the “Red States” are “in town” only for the convention, the Census Bureau uses an outdated methodology that credits the population of disenfranchised prisoners to the small communities that host the prisons. This practice inflates the population of the upstate region, giving it additional clout in the state legislature without risking a change in who wins the legislative seats.

The New York State Senate has a long history of gerrymandering districts to keep itself firmly under Republican control in a state dominated by Democrats. The inclusion of tens of thousands of New York City’s disenfranchised residents as a part of the upstate population is one of many factors that aid the Republicans in keeping control of the State Senate. 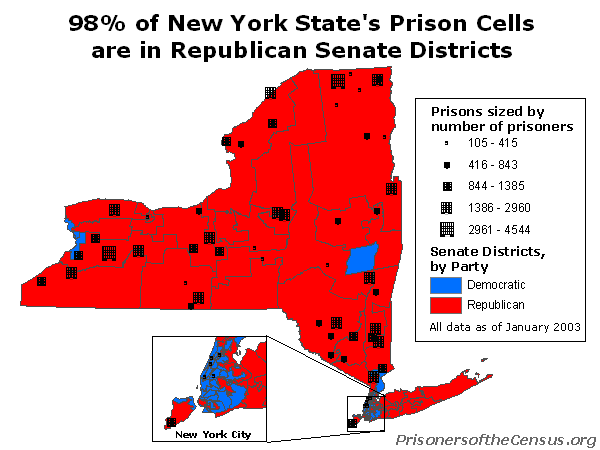 Legislative districts belong to the people, not the politicians

The mayor of Marion Ohio — which contains a number of large prisons — was quoted in an article about our Importing Constituents: Prisoners and Political Clout in Ohio report as saying that he hasn’t noticed any added clout in the state capitol as a result of the Census Bureau counting state prisoners as residents of his town.

The mayor of one small town within a larger district is not likely to “notice” an increase in his town’s influence over state politics, but the discussion did remind me of a critical point I haven’t been making often enough: In a democracy, districts are supposed to belong to the constituents, not the politicians. When we get this backwards we reduce the constitutional principle of “one person one vote” to the meaningless “one politician per district”.

To show why this matters, let me use an example not discussed in our report but in the Marion Star article: the most recent redistricting of the Marion City Council. In 1996, city annexed nearby prisons which “meant a significant jump in the size of Marion City Councilman Ralph Cumston’s 1st ward”. The solution? “Splitting” two of the facilities off and “putting them in to 2nd ward Councilman Phil Hatch’s ward.”

END_OF_DOCUMENT_TOKEN_TO_BE_REPLACED

Rural Pennsylvania invests in prisons, but not for their own residents 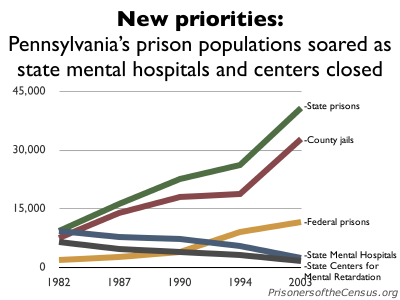 Pennsylvania built 2 state prisons in the 1960s, 1 in the 1970s and 5 in the 1980s. Prison construction exploded in the 1990s, with 11 new state facilities. Three more have been built or are under construction since.

Pennsylvania’s federal prisons grew quickly as well. The Penitentiary at Lewisburg opened in 1932, and a facility was added in the 1960s, the 1970s, two in the 1980s and 4 in the 1990s. Pennsylvania is only 4% of the U.S. population, but houses 8% of the nation’s federal prisoners. 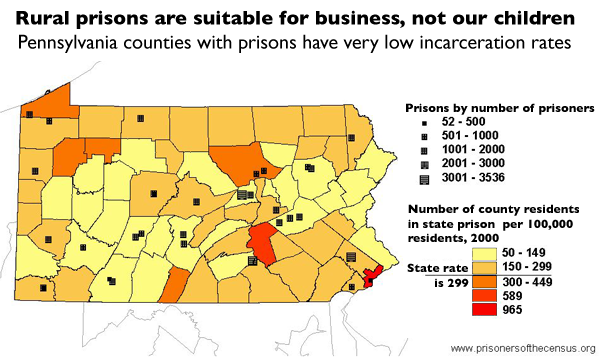 It would appear that incarceration might be good for business in these rural counties, but these same counties view incarceration as anything but positive for their actual residents.

For more on prisoners and the census in Pennsylvania, see also: Prisoners and the 2000 Census by Robert T. Hoetzel; Felon Disenfranchisement: Pennsylvania’s Sinister Face of Vote Dilution, by Jon E. Yount; and Too Big to Ignore: How counting people in prisons distorted Census 2000 by Rose Heyer and Peter Wagner. 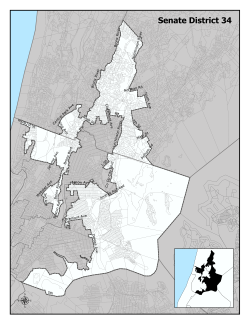 District 34 as shown on the New York Senate’s official map. It took me over a year and to find Rikers Island on this map because the boundaries were unrecognizable. (Larger version.) 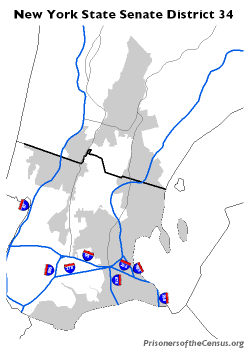 I made this map. The Bronx-Westchester border is emphasized and the major highways added. 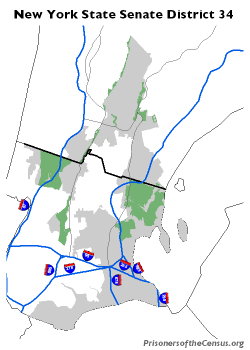 This map includes the major parks. (Note how the parks “orphan” portions of the district and make it less contiguous.) 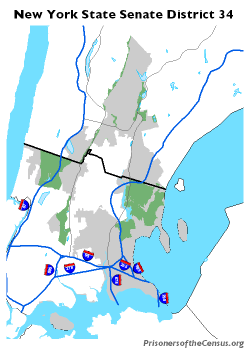 Adding in the open water reveals the actual shape of the district. 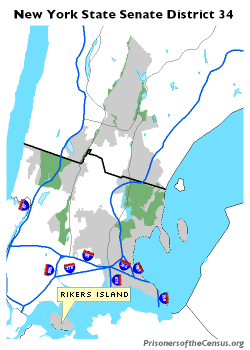 New York State Senate District 34 was discussed in the column last week. This district straddles the border between Bronx County in New York City and suburban Westchester County. If the New York City residents in state prisons had been counted at home rather than in upstate prisons, the Bronx side of the border might have been populous enough to dominate the district. District 34 also has a remarkable shape and story. The New York Times described the shape as “a doughnut that has had a bite taken out of it and then been run over by a car”. The district was apparently created to include many white communities, while excluding the African-American community in the center as well as the home of a political opponent of the incumbent. (See original map at right.)

The district configuration was a hotly contested issue at the redistricting taskforce meeting in the Bronx that I testified at in March 2002. I maintained that even though the U.S. Census currently counts prisoners as if they were permanent residents of the state prison, the New York State Constitution requires an adjustment to Census Bureau data. The prisoners should be counted back at their home addresses because their legal residence does not change during incarceration. Without this population adjustment, New York City loses 43,740 residents to the upstate areas that contain state prisons.

Because the district maps prepared for the hearing did not include cultural and geographic features, no one present noticed the population elephant hiding in the corner. This article suggests an alternative way of looking at district data and the question of whether District 34 represents a single cohesive community.

The second map at right approximates the layout of the official District 34 map, with the local major highways added and a dark border between the Bronx and Westchester Counties. (Westchester is to the north of the dark line.) The third map includes the major parks and the fourth map includes the open water.

The grey oval at the bottom of the last map is the population elephant: Rikers Island, the largest penal colony in the world. Senate District #34 snakes down through the Bronx to include the 12,780 people on Rikers Island. (According to Census data, 7,897 are Black and 3,443 are Hispanic.) Very few of the Rikers Island detainees are permanent residents of District 34, and yet they were counted there for redistricting purposes.

Upstate Senators have boasted that while they do get letters from prisoners with complaints, they are free to ignore these “constituents”. But the Senator who represents District 34 has an even better deal: None of the 13,000 phantom residents of Rikers Island cast a vote there, and the senator from District 34 is about the last person a temporary detainee will think to write to.

After all, District 34 is a district dominated by Westchester County. The only way on or off Rikers Island is the bridge that connects it to Queens.

Large jail populations counted in the Census can be just as important as large prisons when it comes to diluting the votes of neighborhoods with large numbers of incarcerated people.

Border districts hang in the balance of Census counting decisions

Below is a map of New York Senate district 34. The boundary line of this district was the subject of a lawsuit arguing that it was drawn to dilute the voting strength of Blacks and Hispanics. 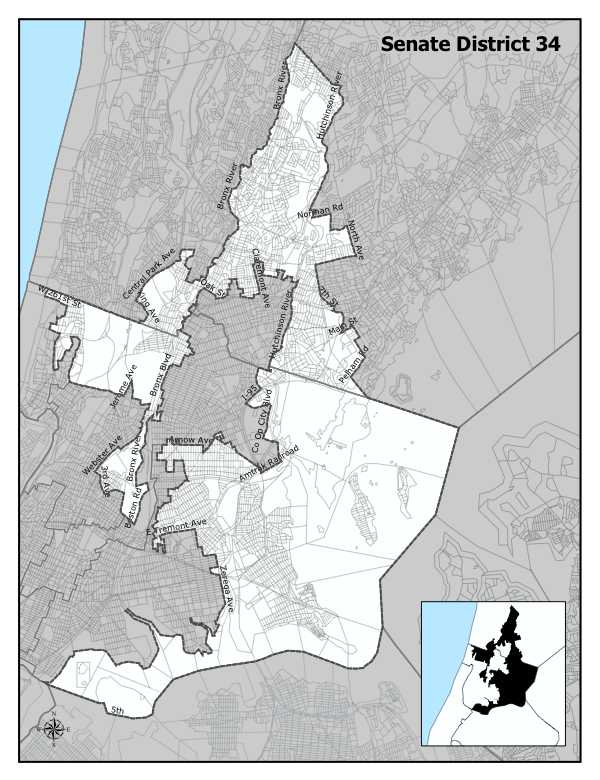