For immediate release — On Tuesday, Illinois Governor J.B. Pritzker signed an omnibus criminal justice package that (among several victories) makes Illinois the tenth state to end prison gerrymandering. HB3653 ensures that, beginning in 2030, people in state prisons will be counted as residents of their home addresses when new legislative districts are drawn.

The Prison Policy Initiative, which has been leading the national fight to end prison gerrymandering for almost 20 years, notes the significance of this particular victory. “One in three U.S. residents now lives in a place that has ended prison gerrymandering,” said Legal Director Aleks Kajstura. 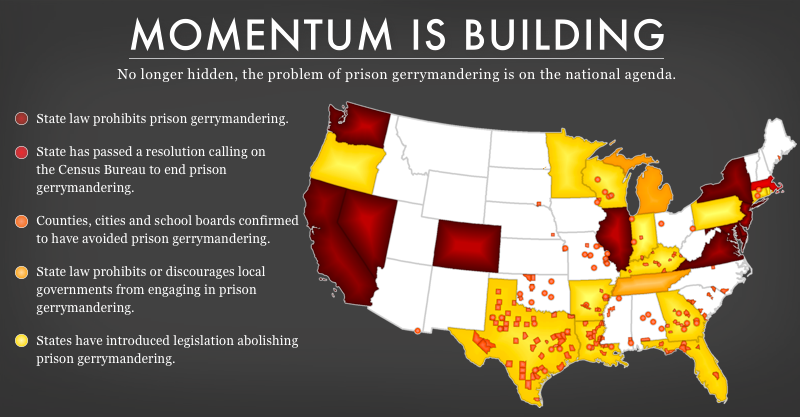 But this important win also falls far short of what the Prison Policy Initiative and other advocates hoped for. The part of HB3653 ending prison gerrymandering was singled out in a last-minute change delaying implementation until 2030, rather than ensuring that changes go into effect in the current redistricting cycle. “The state’s delay means another decade of using redistricting data that counts incarcerated people in the wrong place,” said Aleks Kajstura. “While the state waits another six months for the Census’ redistricting data, it could be using that time to count people at home.”

Illinois law states that going to prison does not change someone’s official residence. However, the Census Bureau counts incarcerated people as residents of the places where they are incarcerated. As a result, when Illinois uses Census counts to draw legislative districts, it unintentionally enhances the representation of people living in districts containing prisons. Counting incarcerated people as residents of the prison gives extra representation to the prison district, dilutes the representation of everyone who does not live next to the state’s largest prison, and prevents the state from fulfilling the constitutional requirement of equal representation. Indeed, 22 counties and cities in Illinois that have large correctional facilities already adjust their own redistricting data to ensure equal representation on city councils and county commissions.

While the upcoming redistricting cycle means that the clock is ticking for states that want to end prison gerrymandering, every state still has an opportunity to limit the impact of the distortion. Legislation is not the only way to end prison gerrymandering before new districts are drawn: State and local redistricting officials can also minimize the impact of the Census’ prison counts by using “group quarters” table that will be published with the usual redistricting data. The Census Bureau is publishing the table to make it easier for states to identify correctional facilities in their redistricting data. “More states need to follow Illinois’s example in passing swift reform, but they have to make sure that reforms go into effect immediately or they will face 10 more years of prison-driven democracy distortion,” said Kajstura.

Illinois’s new law applies only to redistricting, and will not affect federal or state funding distributions.