The new law makes Virginia the third state this year, and the ninth state in total, to end the practice known as prison gerrymandering.

For immediate release — Last week, Virginia passed Senate Bill 717 and its identical House bill, HB 1255, which ensure that people in state prisons will be counted as residents of their home addresses when new legislative districts are drawn. The new law makes Virginia the ninth state to end the practice known as prison gerrymandering, after Colorado and New Jersey passed their own laws earlier this year. Over 30% of US residents now live in a state, county, or municipality that has ended prison gerrymandering.

The Virginia Constitution states that, for the purposes of voting, people in prison remain residents of their hometowns. However, the Census Bureau counts incarcerated people as residents of the places where they are incarcerated. As a result, when Virginia used Census counts to draw past legislative districts, it unintentionally enhanced the representation of people living in districts containing prisons.

“Virginia’s new law recognizes that ending prison gerrymandering is an important issue of fairness,” said Aleks Kajstura, Legal Director of the Prison Policy Initiative. “All districts — some far more than others — send people to prison, but only some districts contain prisons. Counting incarcerated people as residents of the prison gives extra representation to the prison district, dilutes the votes of everyone who does not live next to the state’s largest prison, and distorts the constitutional principle of one person, one vote. This new law offers Virginia voters a fairer data set on which future districts will be drawn.” 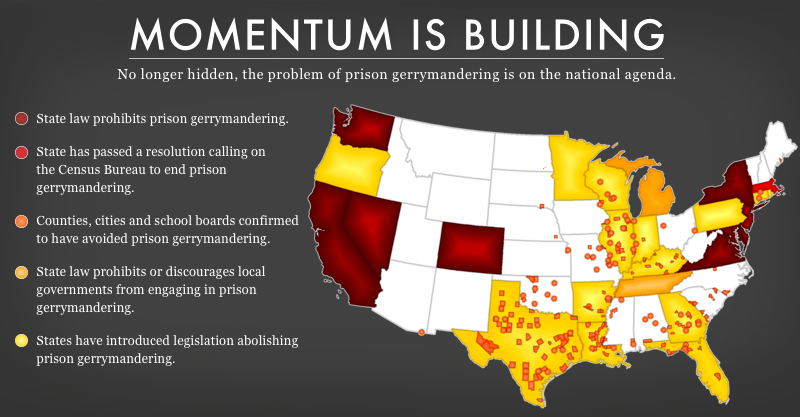 In 2013, Virginia passed House Bill 1339, which ended a state requirement that had forced some local governments to engage in prison gerrymandering. HB 1339 lifted limitations on which counties, cities, and municipalities could exclude incarcerated populations for redistricting purposes. The new law passed last week builds on this progress by explicitly requiring Virginia state and local redistricting officials to count incarcerated people as residents of their home addresses.

Virginia is also considering a constitutional amendment, reforming the state’s redistricting process, that contains similar provisions ending prison gerrymandering. The amendment will be on the ballot for voters to approve in the fall. However, now that SB 717 and HB 1255 have passed, the success or failure of this constitutional amendment will not change how Virginia counts incarcerated people during redistricting.

Over 10 other states introduced legislation to end prison gerrymandering in the current legislative session. “We applaud Virginia for enacting reforms that will allow it to draw fairer state legislative districts,” Kajstura said. “Other states currently considering similar bills will need to act swiftly to ensure that reforms can be implemented for the upcoming redistricting cycle, but unfortunately many states have needed to end their legislative sessions early because of the coronavirus pandemic.”

Virginia’s new law applies only to redistricting, and will not affect federal or state funding distributions.