Common Cause Connecticut and the Prison Policy Initiative update their fact sheet about prison gerrymandering in Connecticut. 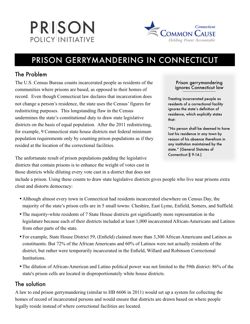 We’ve updated our fact sheet about prison gerrymandering in Connecticut, produced with Common Cause Connecticut. The fact sheet summarizes the findings of our 2013 report Imported “Constituents”: Incarcerated People and Political Clout in Connecticut:

The fact sheet is also available on our Connecticut campaign page.