“Putting the con in constituent”: prison gerrymandering in Florida

"There’s nothing a state rep loves more than a captive audience. Except for a captive constituency."

Yesterday’s Miami Herald ran a great column by Fred Grimm on why it’s time for Florida to do away with prison gerrymandering. The column begins:

There’s nothing a state rep loves more than a captive audience. Except for a captive constituency.

North Florida pols have packed their state House districts with a particularly low-maintenance category of citizens. The kind who don’t show up at townhall meetings clamoring about too much traffic or lousy parks or crumbling bridges or under-funded schools or the need for more cops on the beat. They never, ever complain about too few cops.

Best of all they don’t go around town grumbling that folks should vote for that other candidate. They can’t. They can’t vote. They’re state prisoners.

As Grimm explains, the Florida legislature hasn’t yet passed legislation to prevent the Census Bureau’s prison count method from skewing state democracy. On the local level, however, many counties are taking action. County redistricting isn’t over yet in Florida, but we’ve already found that quite a few counties refuse to pad their local districts with prison populations. Hopefully soon the state legislature will follow local governments’ lead by ending prison gerrymandering statewide.

"[Prison gerrymandering] distorts the political process and raises concerns about the fairness of the census process itself." 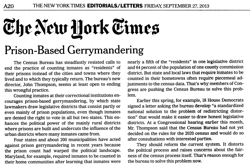 The New York Times published a strong editorial today calling on the Census Bureau to end prison gerrymandering by tabulating incarcerated people at their home addresses in 2020:

[Prison gerrymandering] distorts the political process and raises concerns about the fairness of the census process itself. That’s reason enough for the bureau to solve this problem now.

Census Bureau hears from states that prison gerrymandering must go

Leah Sakala blogged this week about how prison gerrymandering was discussed at a recent congressional hearing on the 2020 Census. It was also a major part of a meeting about the Census Bureau and redistricting at the National Conference of State Legislatures’ most recent conference last month. At a pre-conference session I attended, the Bureau reported on its review of the 2010 Census and its planning for 2020. The meeting was powerful evidence that the Bureau is hearing state governments’ concerns about the problem of prison gerrymandering.

The meeting left me with three timely observations about the Census Bureau and some new reasons to be even more optimistic that we can end prison gerrymandering nationwide by 2020: At the pre-conference session, a presenter from the Census Bureau highlighted the release of the “Advance Group Quarters” data on where prison populations were tabulated as one of the major improvements of the 2010 Census. The Bureau plans to make sure that timely data on prison populations becomes a standard piece of the redistricting data set.

2. The Census Bureau recognizes how useful the Advance Group Quarters Summary File was to state and local governments. In fact, the Bureau is working to incorporate that data as a standard element of the Bureau’s larger redistricting data set. The Bureau is still working on deciding whether or not it will change its own policy for where to count incarcerated people in the 2020 Census.

3. The Bureau knows that prison gerrymandering is one of the major data problems to solve for the 2020 Census. Publishing timely prison tabulation data last decade was a step in the right direction for sure, and this data helped several states and hundreds of local governments take action on their own.

These important state and local approaches, however, can’t help places like Massachusetts which are required by their state constitutions to use unadjusted Census data. A change in the Census Bureau’s methodology to count incarcerated people at their home addresses would mean a national solution for everyone. My worry is that the Bureau won’t start the necessary investigations and research in a timely way so that it can make an informed decision before it is too late. (And the Bureau’s budget struggles certainly aren’t helping matters.) On the other hand, the good news is that the Census Bureau still has time to start putting the pieces in place.

Finally, the discussion at the end of the session made it clear just how much enthusiasm states have for finding solutions to prison gerrymandering. There are lots of things that states are concerned about when it comes to redistricting. At this session, however, prison gerrymandering was at the top of the list and I fielded questions from legislators, staffers and advocates in Tennessee, West Virginia, Georgia, Texas, Virginia and other states.

I’m optimistic that the new Census Bureau Director will want to seize this opportunity to give state and local governments what they need: an end to prison gerrymandering. The Bureau is uniquely suited to solve this problem nationwide once and for all, and I’m looking forward to the day when the Bureau trumpets ending prison gerrymandering as one of its major Census improvements.

The American Civil Liberties Union (ACLU) of Florida is urging the School Board of Hamilton County to avoid prison gerrymandering. As Nancy Abudu, the Director of Legal Operations at the ACLU of Florida, wrote:

If the new school board districts are based on unadjusted Census Bureau data… the few actual residents who live near the prison would have more say in local government than anyone living anywhere else in the county.

The school district has not redistricted in a while, letting population shifts over time slowly skew the distribution of voting power among the Board’s districts. And the School Board is now in the process of redistricting to equalize the population among the districts, providing its residents an election system that upholds the principles of “one person, one vote”.

But the Census Bureau’s method of counting incarcerated people from across the state as if they were residents of a state prison located in the county threatens to undermine the County’s efforts at equal representation for the county’s actual residents. Based on our research, if the Board were to use Census data, without adjusting for the prison population, the district with the prison in it would likely have less than a hundred of actual residents while every other district would have nearly 3,000.

As the ACLU’s letter suggests:

Removing the incarcerated populations from [the Board’s] redistricting data… would ensure that [the Board’s] new districts contain equal numbers of actual county residents.

The new Census Bureau Director makes it clear it's not too late to develop a solution.

Congress and the Census Bureau are deep in discussion about planning for the 2020 Census, and the question of whether or not prison gerrymandering will continue to undermine state and local democracy in the next decade is still on the table.

At a congressional hearing about the 2020 Census on Wednesday, I was happy to see that Congressman William Lacy Clay asked the new Census Bureau Director, John Thompson, how the Bureau plans to count prison populations. Congressman Clay noted that he had already submitted a joint letter to the Bureau with 17 other congressional colleagues urging the Bureau to count incarcerated people at their home addresses in 2020. He also pointed out that several states have already passed their own laws to avoid prison gerrymandering by adjusting their redistricting data, a solution that has been upheld by the U.S. Supreme Court.

Even though we’re frustrated that the Census Bureau isn’t farther along in developing a solution, the Director’s reply made it clear that it’s not too late to end prison gerrymandering. He said that the Bureau hasn’t yet decided how it will handle prison populations in the 2020 Census, and emphasized the importance of stakeholder input in the Bureau’s decisionmaking:

My opinion on this will be based on consultation with stakeholders to try to adopt the rules that will be most appropriate to count people.

Here at the Prison Policy Initiative, we’re looking forward to working with Director Thompson to develop a national solution to prison gerrymandering by 2020. It’s time to update the Census Bureau’s methodology to be able to count incarcerated people in their home communities next time around.

Columbia County is about to reapportion political power, free from the distortion caused by prison gerrymandering. An article in today’s Register-Star reports that Columbia County, New York is working on reapportioning local political power to comply with the Supreme Court’s requirement that every voter have a right to equal say in government affairs. Thanks to a 2010 historic voting rights law that outlawed prison gerrymandering in New York, this time the county’s reapportionment process won’t be undermined by the Census Bureau’s prison miscount.

Before, Columbia County based local apportionment on total Census Bureau population data, which includes all the people who are locked up in the Hudson Correctional Facility. That gave the community members who live in the Ward that contains the prison an unfair advantage at the ballot box. But no more.

The new law solved this electoral quandary by requiring that incarcerated people in New York be counted at their home addresses for redistricting purposes. This means that Columbia County’s new apportionment scheme will be based on number of people who are actual Columbia County residents, which, at the end of the day, is what fair electoral systems are all about.

County Supervisor Ellen Thurston’s ward contains the Hudson prison, so she’ll be losing her extra political sway now that incarcerated people are counted in their home communities. But she knows that ending prison gerrymandering was the right thing to do:

Despite the loss of population, Thurston said she agreed with the state law.

“I think it’s fair that [incarcerated people] be counted in their hometown,” she said.

Prison gerrymandering no longer distorts New York’s state legislative districts. When the last of New York’s local governments, such as the City of Rome, finish up reapportioning local electoral power to comply with the law as well, the state will be completely free from the scourge of prison gerrymandering.