Utica Observer-Dispatch to City of Rome, NY: It’s time to follow the law

"The city is still counting prisoners as population... it’s wrong to include them when voter representation is determined."

The Utica Observer-Dispatch published a strong editorial calling on the City of Rome to comply with the New York law banning prison gerrymandering by updating its city council lines: 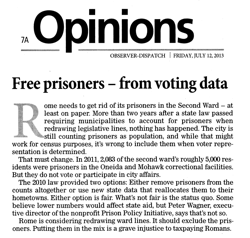 Rome needs to get rid of its prisoners in the Second Ward — at least on paper. More than two years after a state law passed requiring municipalities to account for prisoners when redrawing legislative lines, nothing has happened. The city is still counting prisoners as population, and while that might work for census purposes, it’s wrong to include them when voter representation is determined.

That must change. In 2011, 2,083 of the second ward’s roughly 5,000 residents were prisoners in the Oneida and Mohawk correctional facilities. But they do not vote or participate in city affairs.

The 2010 law provided two options: Either remove prisoners from the counts altogether or to use new state data that reallocates them to their hometowns. Either option is fair. What’s not fair is the status quo. Some believe lower numbers would affect state aid, but Peter Wagner, executive director of the nonprofit Prison Policy Initiative, says that’s not so.

Rome is considering redrawing ward lines. It should exclude the prisoners. Putting them in the mix is a grave injustice to taxpaying Romans.

Today, a headline in the Utica Observer-Dispatch declared: “Rome still counting prisoners in legislative districts”. Several years after New York outlawed prison gerrymandering, the city of Rome, in Oneida County, New York, is still dragging its feet, clinging to old ward lines that give extra representation to the residents of the ward with the prison. As we’ve been watching the state of New York and its local governments draw fairer districts without prison gerrymandering, we were shocked to see Rome — the most dramatic example of prison gerrymandering in the state — fall behind.

The 2000-era data underlying the current districts tabulated the people incarcerated at the Oneida and Mohawk state correctional facilities as if they were residents of Rome. As a result, half of Ward 2 was made up of incarcerated people; that gave every actual resident of Ward 2 twice as much voting power as any other resident of the city. And the 13-year-old data still haunts the ward boundaries today, diluting votes, and democracy in the city.

The 2010 Census again tabulated the people incarcerated in the two state correctional facilities as if they were residents of the city. (The Oneida facility has since closed, depriving Ward 2 of even some of its phantom constituents.) But, in 2010, New York State passed a law (Part XX of Chapter 57 of the Laws of 2010) requiring cities like Rome to either exclude the prison population form redistricting data, or use the redistricting data published by LATFOR (New York’s Legislative Task Force on Demographic Research and Reapportionment), which counts incarcerated people at their home addresses. The data for both options has been available for almost two years.

The most shocking part of the article was Councilman John Mortise (Ward 2) throwing both state and federal law into the wind, and proposing to eventually divide the wards equally, by land area.

Luckily, that’s not how it works. The citizens of Rome are going to get democracy, but the question is: how long they’ll have to wait for it to arrive.