The Census Bureau’s prison miscount is indeed a complication to improving Section 4, but it’s neither an insurmountable barrier nor a permanent one.

Yesterday, the Supreme Court struck down Section 4 of the Voting Rights Act, the section that determines which state and local governments must, under Section 5, receive federal approval before changing their voting laws. By striking down Section 4’s criteria, the Court has, at least temporarily, made Section 5 irrelevant.

The solution is, as the Court said, for Congress to develop a new set of criteria to determine which jurisdictions have to report to the federal government under Section 5. In a New York Times article about various proposals for a new formula, we noticed that one proposal – although probably the least likely to be used — is seriously skewed by the Census Bureau’s outdated practice of tabulating incarcerated people as if they were residents of correctional facilities. (Under most state laws, people in prison remain legal residents of their pre-incarceration residences.) This creates big problems at redistricting time, because it transfers political clout to the areas that host prisons and dilutes the votes cast in every other district. We call it “prison gerrymandering,” and that’s usually where our focus on the implications of Census Bureau’s prison miscount stops.

Although we’ve occasionally written about how the Census Bureau’s prison miscount distorts the demographic profiles of communities, we usually choose to focus on the larger harm to voting rights rather than just demographics. But the need for a new formula for Section 4 changes that calculus a bit.

The New York Times published this map with 2012 data showing who would be covered by Section 4 if it were changed to apply to state and counties where the estimated citizen turnout was below 50%: 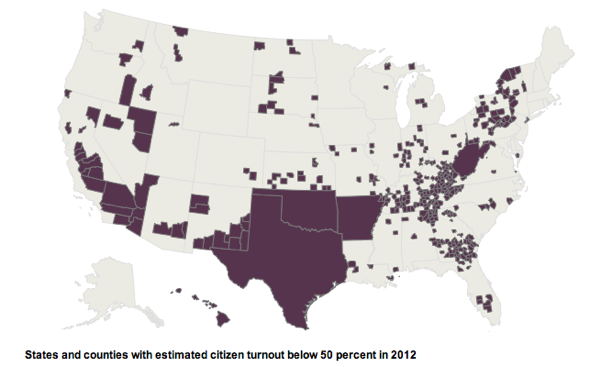 This map looked eerily familiar to me; I recognized many of these counties, especially in Colorado, Montana, New York, Florida, Oregon, California, Nevada, Arizona, and Michigan, as places that I know have large prisons. Northern New York and Eastern Oregon were the dead giveaways that made me realize the similarities between this map and one from my 2004 report with Rose Heyer, Too Big to Ignore: How Counting People in Prisons Distorted Census 2000: 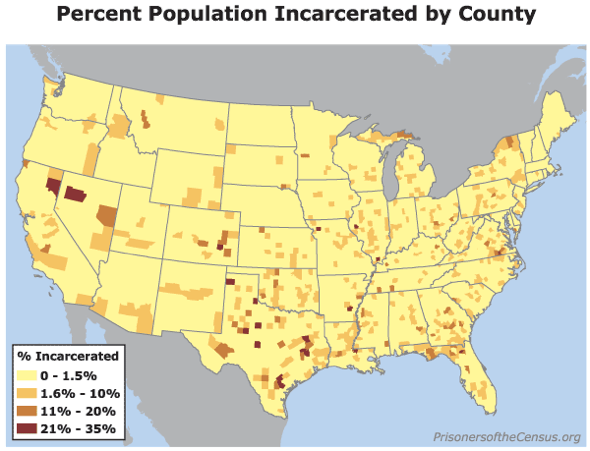 In some counties, inflating the reported population by including non-voting incarcerated people who come from other parts of the state could slightly change the portion of the total population that turns out to vote in a given election. But in other sparsely populated rural counties, massive prisons can radically change the apparent voter turnout. In our study of the 2000 Census, we found 21 counties where more than 21% of the population was incarcerated. Less poetically, we found 91 counties where more than 10% of the population was incarcerated. These weren’t necessarily the most punitive places, just the places where the Census Bureau was the least able to easily tell you something useful about the county because information about the actual residents was skewed by information about the prison population. The data used to make the New York Times‘s map isn’t publicly accessible, so I can’t do my own calculations, but I’d expect that what appears to be a pattern of voting suppression in upstate New York is actually just the Census’s reflection of rural prison construction.

I don’t have a position on which formula Congress should use to update Section 4 of the Voting Rights Act. There are certainly lots of ways to define which communities need Section 5 oversight, but clumsy approaches that single out rural counties with prisons as vote suppressors aren’t good solutions. (This is especially true given that the decision to bar people in prison from voting is a state decision, not a local one.)

The Census Bureau’s prison miscount is indeed a complication to improving Section 4, but it’s neither an insurmountable barrier nor a permanent one: