Ending prison gerrymandering is one of the report's 5 main recommendations to improve democracy in the Midwest. 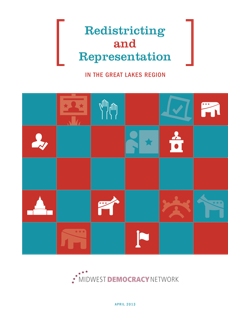 This month the Midwest Democracy Network released a great new report, Redistricting and Representation in the Midwest, providing an overview of major democracy issues in Midwestern states and offering succinct recommendations on how to improve voting fairness.

The report calls for an end to prison gerrymandering as one of the five main recommendations (page 30):

The current practice of counting prisoners as residents in the district where the prison is located artificially inflates the representation of those districts and deflates representation in other districts.

The ultimate remedy is for the Census Bureau to count people where they are from rather than where they are incarcerated. Advocacy for this policy change prior to the 2020 count is underway.

In the meantime, the best option is for correction officials to track the home addresses of inmates and provide that information for use during redistricting in 2021. Delaware, Maryland, New York, and California have adopted legislation requiring use of home addresses of prisoners during state and local redistricting. The changes were in effect in the most recent round of redistricting in Maryland and New York, and will be applied after the 2020 Census in California and Delaware.

A possible compromise option is to exclude prison populations when drawing new district lines. The Census Bureau provides information needed for this step, and more than 150 local governments around the country, including Terre Haute, Indiana, address prison gerrymandering in this way. State laws that inhibit this local approach should be changed. Michigan, for example, adopted a state law that excludes prison populations in local government redistricting.

Our partners at the Midwest Democracy Network have been great leaders in the fight to end prison gerrymandering in the Midwest, including organizing a panel all about it at their most recent conference earlier this year. To stay in the loop about their important work, check out their website or Facebook, or follow them on Twitter.