Hartford Courant column: “Count Inmates In Hometowns, Not In Cells”

Tom Condon wrote a wonderful column for today’s Hartford Courant on why it’s time for the Connecticut legislature to pass a bill ending prison gerrymandering. 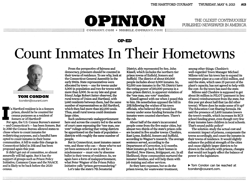 Tom Condon wrote a wonderful column for today’s Hartford Courant on why it’s time for the Connecticut legislature to pass a bill ending prison gerrymandering. Here’s an excerpt (although the full piece is absolutely worth a read):

From the perspective of fairness and democracy, prisoners should be counted in their towns of residence. To see why, look at the Connecticut General Assembly in the early 1960s. State representatives were allocated by town — one for towns under 5,000 in population and two for towns with more than 5,000. So as my late and great friend Judge Robert Satter observed, the rural towns of Union and Hartland, with 1,440 residents between them, had the same number of representatives as did Hartford, which then had more than 162,000 souls. Thus, small rural towns could dominate large cities.

Such undemocratic malapportionment here and across the country led to the series of court cases espousing the “one man, one vote” rulings ordering that voting districts be apportioned on the basis of population — districts with roughly the same number of people.

But in Connecticut, most inmates cannot vote, and those who can — those who’ve not yet been sentenced or are in stir for a misdemeanor — must vote by absentee ballot in their towns of residence. So, we again have a form of malapportionment, what Peter Wagner of the Prison Policy Initiative calls “prison gerrymandering.”