On the Campaign Trail: Marion, Ohio

What would candidates say about how they plan to take action on the problem of prison-based gerrymandering? With election day less than two weeks away, candidates are ramping up the effort to get out the vote in swing states like Ohio. Earlier this week, vice president Joe Biden made a stop in the city of Marion, Ohio to rally support among Marion voters.

But while all residents of Marion can play an important role in the outcome of the national elections, some voters have almost four times the political clout of others in city elections. Why? Because it’s one of the most dramatic examples of prison-based gerrymandering in the country.

When officials in the City of Marion started redistricting after the 2010 Census, they already had a prison-based gerrymandering problem. Two city wards were padded with state prison population, giving an unfair 30% boost to the votes cast by residents in those districts.

But rather than remedy the problem in the most recent round of redistricting, it got worse when both prisons were placed in the very same ward. Today, nearly three-fourths of the population in Ward 1 is made up of people in the state prison, giving one resident in that ward the same access to local government as 4 people in any other ward.

I wonder what Vice President Biden would have said if a Marion resident at the rally had asked him how his administration plans to protect her vote from being diluted due to the Census Bureau’s prison count?

The National Advisory Committee on Racial, Ethnic and Other Populations can pass a resolution calling on the Census Bureau to take action.

Ben Peck of Dēmos testified this morning before the Census Bureau’s National Advisory Committee on Racial, Ethnic and Other Populations, explaining why it’s time for the Census Bureau to plan ahead to end prison-based gerrymandering in 2020 once and for all.

Now is the time, Ben explained, “for the Bureau to undertake the evaluation and research that will be necessary to change its practices for determining the residence of incarcerated persons, so that in the next Census incarcerated persons will be properly tabulated as residents of their home communities.”

Subcommittees of the Race and Ethnic Advisory Committee to the Census Bureau have repeatedly passed resolutions urging the Bureau to take up this research issue:

The Census Bureau made great progress for the 2010 Census by publishing correctional population data in time for state and local governments to avoid prison-based gerrymandering by making populations adjustments on their own. The National Advisory Committee on Racial, Ethnic and Other Populations now has the opportunity to urge the Census Bureau to keep making progress on this issue. After all, as Ben points out, only the Census Bureau has the power to put an end to prison-based gerrymandering nationwide:

Fortunately, the Census Bureau can achieve a full and permanent solution for the 2020 Census: revising its “usual residence” rule to tabulate incarcerated persons as residents of the community where they resided prior to incarceration.

How to spot false majority-minority districts in three clicks

Our online tools can show the race and ethnicity of any given incarcerated population in three simple steps.

Demographers working on voting rights issues frequently examine proposed election districts to ensure that the plans won’t dilute the political power of minority voters. One of the things they look for is the problem of false majority-minority districts.

From the Prison Policy Initiative and Dēmos report, Preventing Prison-Based Gerrymandering In Redistricting: What To Watch For (en español):

Sometimes, a district that seems to have a majority-minority population really doesn’t, because of prison-based gerrymandering. If the minority “population” of the district consists of large number of incarcerated persons – who can’t vote – the district population numbers may be distorted. This creates districts that appear to give minorities the ability to elect the candidate of their choice, but in reality, they cannot. You need to examine any majority-minority district that includes a prison, to ensure that the district really has enough voting-eligible persons of color to create a viable majority with the ability to elect a candidate of choice to office. 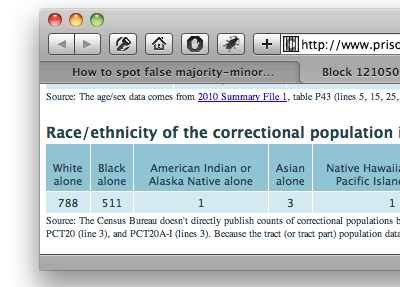 Most demographers who do this work know how to spot a prison in the population data, but they might not know we developed a very simple way to determine the race and ethnicity of any given incarcerated population in three simple steps:

At the bottom of the “detail” page you’ll see a table with race and ethnicity for just the correctional population in that block. We are able to provide this data for every block with a correctional facility in the country except for two in Hawaii and two in New York. For all the others, we provide a unique footnote below the table describing which census tables were used to produce useful race and ethnicity data for the correctional population in that block.

And if you are a GIS user, you can do this in just one click. By using our shapefile, you can access these detail pages right from the info pane of your Maptitude or Arcview software.

Prison-based gerrymandering in The American Prospect

In an era obsessed with political data—Microtargeting! Swing-state polling! Data.gov!—and in a country where we incarcerate people at a higher rate than anywhere else in the world, thinking through the political counting of prisoners calls for the same enthusiasm, because the way we do it now corrupts the very equations upon which representative democracy is built.

She concludes by observing that this issue is more pressing now than ever:

How the U.S. counts its prisoners might be a historical data quirk, but with the U.S. prison population now counted by the millions, it’s a quirk that skews how representative democracy operates.

Wondering how the Census Bureau’s prison count skews your vote? Check out our research results about your state or local government. Then take action and join us in solving the problem.

On the campaign trail: Ocala, Florida

Candidates are urging city residents to exercise their democracy, but will the city take action to prevent prison-based gerrymandering? The Florida city of Ocala got some national attention last week when vice presidential candidate Paul Ryan made a campaign stop in the downtown square on Thursday. But the question of who to vote for on November 6th isn’t the only democracy issue that Ocala residents are currently facing. As I write, the city is working on upholding the “one person, one vote” principle by redrawing the four city council districts to equally distribute the city’s population among them.

But Ocala’s redistricting process is plagued by one major flaw: the city is relying on census data that includes the 1,674 people in the Marion County Jail.

Because the city did not adjust the census data to ignore the jail count, both of the plans that are currently under consideration have lines that are skewed by the jail population.

Fortunately, the city of Ocala has not yet completed the redistricting process, so there’s still time to save local democracy from being skewed by the Census Bureau’s correctional counts. The solution is simple: remove the incarcerated population from the census data used to draw the new districts. If Ocala chooses to implement this solution, it will be in good company; more than 175 other local governments around the country chose to adjust the Census Bureau’s data to avoid prison-based gerrymandering.

How Ocala chooses to deal with this problem is an especially big concern for city residents. But all across the nation, cities and counties that contain correctional facilities face the same problem of how to deal with census data that does not accurately reflect actual communities. So, as we comb over ballot initiative proposals and peruse candidates’ positions this election season, it behooves us to take a step back and consider how the consequences of the Census Bureau’s correctional facility count may be undermining our democratic rights and responsibilities.

We've updated our model bills to end prison-based gerrymandering and shared them with past legislative sponsors. In consultation with our allies in the voting rights and criminal justice movements, we’ve updated our model bills to end prison-based gerrymandering and shared them with past legislative sponsors.

We’ve updated our principal state legislative bill that requires incarcerated people be counted at home for redistricting purposes. The improvements are all clarifications based on lessons learned during the successful implementation of similar legislation in Maryland and New York.

We’ve also generated a model bill that offers a critical interim step without going so far as to commit a state to count incarcerated people at home during the next redistricting cycle. This bill, the Model Incarcerated Population Data Collection Act, would simply require the Department of Corrections to begin collecting home address information for the incarcerated individuals under state jurisdiction now. The data could be used for various purposes, including reentry planning, criminal justice research, or most importantly, redistricting if the U.S. Census Bureau or an additional state decides to count incarcerated people at home for redistricting purposes in the future.

The Madison City Council has everything it needs to prevent the correctional facility from distorting the new city district lines.

Will the the City of Madison, Indiana follow in Terre Haute’s footsteps to avoid prison-based gerrymandering?

The Madison Courier recently reported that Madison City redistricting is underway, and one of the questions facing City Council members is how to handle the state prison population at the Madison Correctional Facility. If the city uses unadjusted Census Bureau data as the basis for the new district lines, more than a quarter of one of the districts will be made up of the prison population. Counting incarcerated people as if they were residents of the prison location contradicts both Indiana state law’s definition of residence and common sense. Failing to adjust the census data would give every three people in the district with the prison as much political clout as four people in any other district, just because of where they happen to live.

Fortunately, as the residents of Terre Haute know, there is a simple solution: take the prison population out of the census data that is used to draw the new districts. The Census Bureau publishes special tables for that express purpose, and more than 150 local governments around the country, including Terre Haute, use this solution.

The Madison City Council has everything it needs to prevent the correctional facility from distorting the new city district lines. Now, it’s time for the Council to act.