It was a great honor to be a finalist alongside someone who has so successfully extended the debate about what progressive politics mean, and a great opportunity to affirm the issue of prison-based gerrymandering on the national progressive agenda.

I’m at the Campaign for America’s Future Conference in Washington D.C., where I was a finalist for the Maria Leavey Tribute award for my decade-long work to end prison-based gerrymandering. I’m here meeting with other activists about ways we can broaden the fight to keep the prison industrial complex from exercising undue influence on the political process.

It was a great honor to be nominated for this award as an “unsung progressive” hero, and an even greater honor to see so many of our allies work so hard to mobilize their supporters to vote for me. There was a flood of support on email, on Facebook, on Twitter and even from behind prison walls urging people to vote for me. Along the way, the Prison Policy Initiative made new allies and the movement to to end prison-based gerrymandering grew stronger.

The nomination was a huge victory, not just for me, but for the entire movement that we’ve built together. 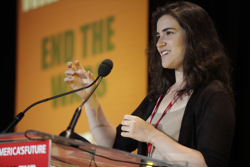 Yesterday afternoon, the Campaign for America’s Future announced that the winner of the Maria Leavey Tribune award was Samantha Corbin, a critical behind-the-scenes organizer of Occupy Wall Street and the Other 98%, which fights against the undue influence of big money in politics.

I congratulate Sam. It was a great honor to be a finalist alongside someone who has so successfully extended the debate about what progressive politics mean, and who so eloquently argues against a tendency in the progressive movement to segregate and marginalize issues not directly tied to partisan struggles.

And I thank all of the folks who voted for me and organized their networks to do so as well. I know that was a lot of work, and I think the effort was well worth it. As long-time readers of this blog know, prison-based gerrymandering was a once-obscure issue that at one time seemed intractable. We’ve built a strong movement that draws on the best that the criminal justice reform and electoral reform communities have to offer, and we’ve won some tremendous victories. And with this nomination, we affirmed our movement’s place on the national progressive agenda.