A leader of the fight to end prison-based gerrymandering in New York State passes away. 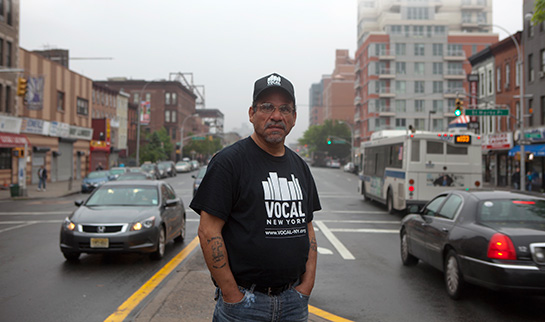 I received some very sad news from Sean Barry at VOCAL-NY this morning about the passing of Ramon Velasquez, the face of New York’s successful campaign to end prison-based gerrymandering:

Ramon Velasquez crossed over on March 27th at a nursing home in Staten Island. He was a longterm survivor of HIV/AIDS and hepatitis C and a fierce community activist. A service will be held TODAY (March 29th) from 6pm – 8pm at Brooklyn Funeral home at 2380 Pacific Street. Ramon is survived by his brother, daughter, two grandchildren and many other family members.

Ramon was a fearless warrior for social justice who inspired and connected with people wherever he went. It seemed like he was everywhere at once and he was always loud. He was usually there first too, sometimes hours early for a 6am bus departure to Albany or a membership meeting.

In and out of prison and jail since he was 14, Ramon became a leader in VOCAL-NY shortly after being released from prison for the last time in 2007. After serving a 17 year sentence, he ended up in Bellevue Men’s Shelter determined to turn his life around. Shortly afterwards, he moved into a transitional housing program for people living with HIV/AIDS run by Praxis Housing Initiatives and eventually led their resident advisory board before moving into a permanent housing program in Brooklyn.

While incarcerated, Ramon led inmate liaison committees that negotiated with prison officials and organized successful inmate-led protests to win better conditions. This shaped his beliefs about social change and the need for people who were directly affected to advocate on their own behalf. After becoming a member of VOCAL-NY, he was involved in campaigns to restore voting rights for people on parole, create affordable housing for homeless people living with HIV/AIDS and pass a “911 Good Samaritan” law to prevent overdose deaths.

After being discharged from life parole in 2010, in part due to his community activism, Ramon was able to travel more widely to Albany and Washington, DC to lobby elected officials and engage in direct action. In August 2011, Ramon was arrested for disrupting the House of Representatives during congressional debate on the debt ceiling while protesting proposed cuts to Medicare and Medicaid. The last protest he participated in was the “Occupy Our Homes” action in early December that moved a homeless family into a vacant house in East New York that had been foreclosed on by Bank of America.

Ramon was the face of the campaign to end prison-based gerrymandering in New York and was recognized for his leadership (alongside Assembly Member Hakeem Jeffries) by the Prison Policy Initiative during an October 2011 ceremony. He had been counted as as a resident of Wyoming County while incarcerated at Attica during the last round of redistricting, instead of his home community in Brooklyn, and he turned his frustration into proactive leadership to change the way inmates were counted. The Public Welfare Foundation also profiled his activism around criminal justice issues. (More of Ramon’s story and some photos in the profile are available online).

He will be deeply missed by his VOCAL-NY family.

VOCAL-NY has put together a page with photos, video and articles featuring Ramon at:
http://www.vocal-ny.org/blog/drug-policy/rip-ramon-velasquez/. I feel compelled to add some additional detail about Ramon’s work abolishing prison-based gerrymandering.

“When I was being counted upstate when I was in prison, the community that I came from was being punished as well by having their vote diluted. It doesn’t make political sense to be counted in a place where you can’t vote and don’t use services. This bill isn’t about money or jobs, it’s about political power.”

And when a group of voters and organizations sought to intervene in the lawsuit to help the state defend the landmark civil rights law, Ramon expertly explained that prison-based gerrymandering hurts everyone who does not live next to the state’s largest prisons, and why VOCAL-NY was stepping up to the plate:

“Many of our members live in communities that are heavily impacted by the criminal justice system and have a disproportionate number of residents sent to state prison. Every district that has fewer prisons than Senator Little’s district loses representation from prison-based gerrymandering, but the districts that see many of their members counted in prison lose even more.”

It is deeply sad to lose a supporter, a colleague, a leader, a client or a friend. Ramon was all five, and much more. I can take some solace in the fact that Ramon was able to get some of the recognition he deserved at our October event and in the Public Welfare Foundation 2010 profile. And I’m very glad that Ramon lived to see the final validation of his work to end prison-based gerrymandering in New York when, just two weeks ago, the Senators who would have benefitted the most from bringing back prison-based gerrymandering abandoned their legal appeals.

Thank you Ramon. New York — and every state that follows its lead — owes you a huge debt for showing the way forward. You will be missed.