Interview with Common Cause Oregon on a creative solution to the problem that some rural districts are unwieldy to represent. 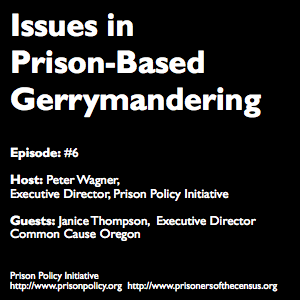 Welcome to issues in prison-based gerrymandering, a podcast about keeping the Census Bureau’s prison count from harming our democracy. The Census Bureau counts people in prison as if they were actual residents of their prison cells, even though most state laws say that people in prison are residents of their homes. When prison counts are used to pad legislative districts, the weight of a vote starts to differ. If you live next to a large prison, your vote is worth more than one cast in a district without prisons. Prison-based gerrymandering distorts state legislative districts and has been known to create county legislative districts that contain more prisoners than voters. On each episode, we’ll talk with different voting rights experts about ways in which state and local governments can change the census and avoid prison-based gerrymandering.

Our guest today is Janice Thompson, the Executive Director of Common Cause Oregon, here to talk with us about her work on prison-based gerrymandering in Oregon and what she calls the rural fairness differential. Janice, thanks for being here today.

Well, thanks for the opportunity. This is an important topic and good to talk about.

Could you introduce yourself to the people listening and reading in on the internet and tell us about yourself and Common Cause and a little bit about your work there in Oregon.

Sure. Common Cause has a slogan that exemplifies what we do: holding power accountable. I have headed the Common Cause office here in Oregon for a little over a year, but before that had ten years working on democracy reform issues heading up a previous organization. I’m coming to this topic in two ways. One is that I got a chance in 2008, 2009 to do a major review of the wide range of opportunities out there to increase voter participation and involvement in the political process. In that context I came to review the range of issues related to prisoners and voting and learned about your organization and this topic of prison-based gerrymandering. The second angle was also work done by, at the time a state representative and now a state senator, Chip Shields, who has been leading this effort in the Oregon legislature. So those two factors merged together and I have been testifying in support of this legislation that was introduced by Mr. Shields. END_OF_DOCUMENT_TOKEN_TO_BE_REPLACED

The National Black Caucus of State Legislators just issued an important resolution calling for an end to prison-based gerrymandering. The resolution, LJE-11-03, passed at the 34th Annual Legislative Conference, calls on the Census Bureau to start counting incarcerated individuals at their addresses of residence, rather than the address of the prison, beginning with the 2020 Census. The National Black Caucus of State Legislators calls upon states to enact legislation modeled after the Delaware, Maryland, and New York laws that ended prison-based gerrymandering in those states. The resolution was sponsored by Maryland State Senator Catherine E. Pugh and Maryland Delegate Joseline Pena-Melnyk, who were also the lead sponsors of Maryland’s No Representation Without Population law that ended prison-based gerrymandering in that state.

The National Black Caucus of State Legislators has published the full text of all 23 conference resolutions on their website, and I’ve included the text of the prison-based gerrymandering resolution below.

WHEREAS, obtaining an accurate count of the population is so vital to representative democracy that the framers of the United States Constitution addressed the issue of the census and apportionment in the opening paragraphs of this governing document;

WHEREAS, the United States Supreme Court requires state and local government to redraw legislative districts each decade on the basis of population, so as to ensure each resident the same access to government;

WHEREAS, the United States Census Bureau (Census Bureau) currently has a policy of counting incarcerated individuals at the address of the correctional institution, rather than their residential address;

WHEREAS, African Americans are incarcerated at a rate six times higher than whites; WHEREAS, the majority of state and federal prisons are built disproportionately in white, rural areas;

WHEREAS, counting incarcerated individuals as residents of the prison community has a particularly negative effect on the ability of African American communities to elect their candidates of choice and receive appropriate and adequate political representation; END_OF_DOCUMENT_TOKEN_TO_BE_REPLACED