The first major film discussion of prison-based gerrymandering is coming soon to a theatre near you! 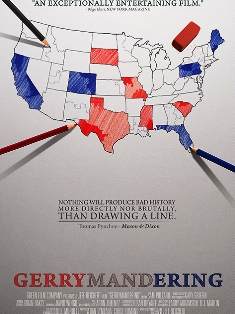 Jeff Reichert has posted the screening schedule for the Gerrymandering film. With a national theatrical release on October 15, select showings before then, and more dates being added all the time, Gerrymandering will be near you soon.

From the official summary:

A wake-up-call documentary that exposes the hidden history of our country’s redistricting wars, mapping battles that take place out of public scrutiny but that shape the electoral landscape of American politics for decades at time, posing a threat not just to democrats and republicans, but democracy as a whole. Right now, across the country, our two major political parties are gearing up for a once-a-decade war whose winner will control Congress for the next ten years, and possibly more. There will be battles in every state, and each will be kept carefully hidden from the prying eyes of average voters who only become more disenchanted with their government with each meaningless election. Democrats and Republicans collude to keep these skirmishes private so that they can maintain total control over the ultimate political weapon: the ability to directly determine the outcome of elections. Why bother stuffing ballots when they can just draw districts? For the first time, Gerrymandering exposes the most effective form of manipulating elections short of outright fraud. After the 2010 Census is finished, will you know where your district went?

It’s a great film, but our favorite part is the film’s treatment of prison-based gerrymandering. In February, I traveled with Director Jeff Reichert and Field Producer Susan Bryant to Anamosa Iowa where 96% of a city council district was incarcerated. We meet the City Councilor who won the election with only 2 votes cast, and we discuss why the city changed its form of government to eliminate the prison district. See a clip:

Keep an eye out for screenings near you.