Editorial praises larger reforms but reminds reformers to include a fix for prison-based gerrymandering.

The current redistricting process is political conflict of interest of the first order. Instead of allowing voters in a district with geographic or demographic integrity to choose their state Assembly and Senate members, lawmakers in effect “choose their voters” by designing districts with one overarching criterion: to ensure their re-election.

The editorial ends with a call to include prison-based gerrymandering in any larger reforms:

One other thing: Companion legislation would end the nonsensical practice of counting state prison inmates as “residents” of the localities where they are incarcerated, for redistricting purposes. There’s no good reason why the 2,500-plus state prisoners being held in Cayuga County should help determine legislative district boundaries in that county — or why the 1,900 Onondaga County residents serving time elsewhere should not be counted in their home county. The sensible measure deserves to be part of the reformed redistricting process.

David Lucas on WAMC’s Legislative Gazette in Albany interviews Sen. Eric Schneiderman and Charlie Albanetti of Citizen Action about legislative proposals to end prison-based gerrymandering in New York State. The practice of using prison counts to draw legislative districts inflates the political representation of some communities and dilutes the representation of others.

Senator Griffo is also interviewed about his opposition to reform. He concedes that it’s ok for 13 rural counties to reject the prison counts when drawing districts, but he argues that changing the state redistricting data is somehow going to affect federal funding based on federal Census data. That’s just wrong. Don’t take my word or Charlie Albanetti’s word for it. Even the editorial board of Senator Griffo’s hometown paper supports ending prison-based gerrymandering in New York. The New York Times says it is time for Albany to end the practice of prison-based gerrymandering, in which people in prison are counted as “residents” to inflate some election districts at the expense of all other districts.

Predictions that a rural Texas town will be getting millions in federal funds from claiming a detention facility in the Census don't stand up to scrutiny.

Raymondville [Texas] is unlikely to receive the millions of dollars in Census-related funds as predicted by Tuesday’s story. [“Immigrant detainees could be valuable for Valley in 2010 census”]. While the Census is used to distribute hundreds of millions in federal funds, the overwhelming majority of this money is block grants to states. The small minority of funds that go to local communities tend to be highly targeted programs too sophisticated to be fooled by where prisoners are counted.

The bulk of the $1,469 per person in funding cited in the article is Medicaid and Highway grants to the state of Texas. Artificially inflating Raymondville’s population with people in the process of being deported will mean a few extra dollars to the state; but the windfall won’t be coming to Raymondville.

The Census Bureau’s decision to count detainees as residents of the detention facility also comes with a downside: fair districting. The Texas Election Code says that a prison cell is not a residence, but Willacy County used the detention facility population counts when it last drew its Commissioners Court districts. The unfortunate result of padding the Third Precinct with people counted at the detention center is to enhance the weight of a vote cast in that precinct and dilute those cast in all other precincts in the county. The recent expansion of the detention facility is only going to make this problem worse.

The immediate solution lies in the actions of at least 14 other Texas counties with large prisons: reject the Census Bureau’s prison count and draw districts on the basis of the actual resident population.

In this podcast, Peter Wagner speaks with the Minnesota Second Chance Coalition about their campaign to end prison-based gerrymandering in that state. 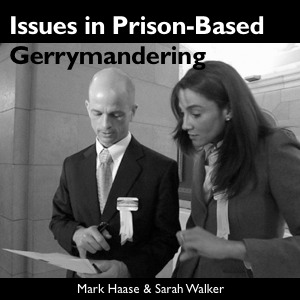 Welcome to Issues in Prison-Based Gerrymandering, a podcast about keeping the Census Bureau’s prison count from harming our democracy. The Census Bureau counts people in prison as if they were actual residents of their prison cells, even though most state laws say that people in prison are residents of their homes. When prison counts are used to pad legislative districts, the weight of a vote starts to differ. If you live next to a large prison, your vote is worth more than one cast in a district without prisons. Prison-based gerrymandering distorts state legislative districts and has been known to create county legislative districts that contain more prisoners than voters.

On each episode, we’ll talk with different voting rights experts about ways in which state and local governments can change the census and avoid prison-based gerrymandering.

Our guests today are Sarah Walker and Mark Haase of the Minnesota Second Chance Coalition. Welcome Sarah and Mark. END_OF_DOCUMENT_TOKEN_TO_BE_REPLACED

Op-ed about prison-based gerrymandering in Pennsylvania

Pennsylvania-focused op-ed argues that voting power should be based on actual residents, not prison populations.

In a recent op-ed on Philly.com, Daniel Denvir argues that voting power should be based on actual residents, not prison populations. The piece includes examples of legislators voting contrary to the interests of high incarceration communities while claiming incarcerated members of those communities as constituents.

Page to support organizing to end prison-based gerrymandering in Delaware.

To support organizing to end prison-based gerrymandering in Delaware, we’ve created a Delaware organizing page. On June 1, the Delaware House of Representatives unanimously passed a bill to count incarcerated people at home for redistricting purposes. The bill now moves to the Senate.

The page has links to the bill, plus two new fact sheets:

and as the campaign heats up we’ll be adding more material. Stay tuned!

Aleks Kajstura and I release a new one page fact sheet about the problem, the law and the solution to prison-based gerrymandering in Rhode Island.

Rhode Island is about to make history; but will it be positive or negative?

Bruce Reilly reports that the Rhode Island legislature is preparing to adjourn without voting on bill #7833, Residence of those in Government Custody Act, sponsored by Joe Almeida.

The bill would count incarcerated people at home for redistricting purposes. If the state fails to act and draws legislative districts based on the Census Bureau’s 2010 prison counts, the state is likely to be home to the most dramatic example of state legislative prison-based gerrymandering in the nation. Rhode Island prisons are clustered in such a way that one legislative district will be about 30% incarcerated, giving every 7 people in one portion of Cranston as much influence as 10 people in any other part of the state.

Bruce says that the legislature’s leadership needs to hear from you that ending prison-based gerrymandering is a priority. More info and contact information is in his blog post.

Rhode Island can make history, and join the state of Maryland and the Delaware House of Representatives in passing legislation to end prison-based gerrymandering, or it can do nothing and make an entirely different kind of history.