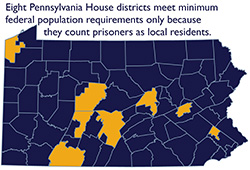 The voting power of Philadelphians is diluted on the state level because state and federal prisoners are counted by the U.S. Census Bureau where they are incarcerated, instead of the prisoners’ home communities in which they lived before they were incarcerated, an advocacy group has concluded.

Eight state House of Representatives districts would not meet federal “one-person, one-vote” standards if nonvoting state prisoners did not count as district residents for purposes of drawing up legislative districts, according to an analysis conducted by Prison Policy Initiative, an advocacy group based in Northampton, Mass.