On Wednesday, Hugh Hamilton of WBAI NYC’s TalkBack! interviewed Demos’ Brenda Wright about prison-based gerrymandering in New York State. The 30 minute segment starts about 30 minutes in to the audio file. Among other topics, Brenda discusses why New York State law says that incarceration does not change a residence and the 13 rural counties that reject the Census Bureau’s prison count when drawing their own district lines.

This morning, Celeste Headlee interviewed Dodge County (Wisconsin) Supervisor Jim Layman and myself on the national morning news program The Take Away. Half of Jim Layman’s county legislative district is incarcerated, and he says the Census is wrong to count incarcerated people from other parts of the state in his district. I discussed the national, state and local efforts to eliminate prison based gerrymandering. The 6 minute segment starts about 22 minutes in to the file.

A number of new articles and resources about prison-based gerrymandering were posted over the long holiday weekend.

The Brennan Center’s Justin Levitt gave a speech to the International Municipal Lawyers’ Association in Columbia, SC on alternative voting systems and the count of incarcerated persons in redistricting. The text of Justin Levitt’s talk is on the Brennan Center website.
END_OF_DOCUMENT_TOKEN_TO_BE_REPLACED 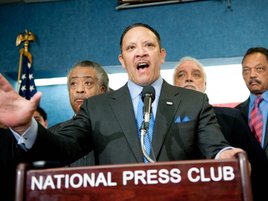 The 2010 Census is almost here, and the Prison Policy Initiative needs your support.

The financial and moral support of the people who read this blog has helped to propel the once obscure issue of prison-based gerrymandering into the national consciousness.

Despite our progress over the last 7 years, the Census will again be counting incarcerated people as residents of the prison towns, shifting political power to legislative districts that contain prisons.

If we act fast, short-term solutions are still possible. We are working with states, counties, and redistricting experts to develop ways that they can adjust the Census Bureau’s prison count prior to redistricting and thereby minimize the negative effects of the prison miscount.

We need your continued support to do this. We’ve received some generous foundation support in the last few months that has enabled us to expand our staff, and we need your help to raise the last of the funds we need for our final push.

The Census is almost here. The time to shape the debate around the 2010 Census is now. If you can again help support our work, please do so today.

The Vicious Cycle of the Census

Matt Kelley on Change.org puts the prison miscount in the context of why an accurate Census matters to urban communities.

Matt Kelley puts prison-based gerrymandering in the context of why an accurate Census matters to urban communities on Change.org:

The 2010 U.S. Census is about to hit full swing, and it’s critical that we commit to counting everyone.

The most directly pertinent census issue to the criminal justice system is the colossal mistake of counting prisoners where they’re incarcerated instead of where they’re from.

As Elena Lavarreda wrote recently in an excellent piece on change.org, counting prisoners in rural districts gives undue political influence to farmlands while robbing power from poor inner-city populations. This is a critical issue and it needs to be addressed.

But there’s a broader issue, too. Not only will poor urban communities be counted without their prisoners, they’ll also be missing more than a million people the census classifies as Hard to Count. This includes people with no fixed address, or people who stay in a public housing unit but aren’t on the lease. These are people who might not be around on the day the count happens, or might be suspicious of a guy from the government coming to count them. Every person the census misses means lost services for the community and exacerbates the cycle of poverty.

– The Vicious Cycle of the Census.

No Census of Justice

Prison Policy Initiative Research Associate Elena Lavarreda has an article on Change.org: No Census of Justice about how the Census Bureau’s method of counting people in prison distorts democracy and changes criminal justice policy.

The Daily Times on Maryland's Lower Eastern Shore has endorsed a call for Somerset County to base future legislative districts on the resident population.

The Daily Times in Salisbury, Maryland on the Lower Eastern Shore, has endorsed a call for Somerset County to base future county legislative districts on the resident — not prison — population.

END_OF_DOCUMENT_TOKEN_TO_BE_REPLACED

The New York City Council holds a hearing on prison-based gerrymandering, supporting change at the Census Bureau and in Albany.

Yesterday, the New York City Council held a hearing on two prison-based gerrymandering resolutions. One, put forth by member Larry Seabrook calls on the Census Bureau to count incarcerated people as residents of their home addresses rather than at the prisons in future Censuses. The second one, introduced by member Robert Jackson and 11 co-sponsors could influence the 2012 round of redistricting after this Census, as it calls upon the New York State legislature to pass bills S1633 and A5946 which would require that state and county legislative districts be drawn on adjusted data counting incarcerated people at their home addresses.

END_OF_DOCUMENT_TOKEN_TO_BE_REPLACED

County Supervisors in Wilkinson County, Mississippi faced a quandary after the last census. The Corrections Corporation of America had just opened a large private prison in the county, and, per its usual practice, the Census Bureau credited the population of the prison to the county.

Should the county draw a county legislative district where almost half of the population was incarcerated in the private prison? This would give the actual residents of the prison district almost twice as much influence over county affairs as residents of the other districts. They wrote to State Attorney General Mike Moore to seek his advice.

END_OF_DOCUMENT_TOKEN_TO_BE_REPLACED

The New York Times is calling for the New York state legislature to turn the process of drawing legislative districts over to an Iowa-style non-partisan independent redistricting commission.

They explain the need:

Of all the tricks that New York’s legislators use to hang on to office, the one that works best — for the politicians, that is — is redistricting. Mapmaking in Albany is a dark art form designed to make absolutely certain that incumbents in the majority party are safe from electoral competition (a k a democracy).