Sam Roberts of the New York Times has written an excellent article about Anamosa Iowa where a prison amounts to 96% of a city council ward:

The article highlights the efforts of Bertha Finn, who organized a referendum last year which abolished the prison district by switching the small city to an at-large system of government. I’m quoted in the article cheering the people of Anamosa on:

“The people of Anamosa have the right idea,” Mr. Wagner said. “A small group of people should not be allowed to dominate government just because the Census Bureau counted a large prison there.”

You can also read previous blog posts and reports about some of the other places discussed in the Times:

If you live in a small community with a large prison, be sure to check out our Democracy Toolkit to determine if — and to what degree — prison populations are distorting your access to local government.

And finally, this map was made by our friend Adell Donaghue to illustrate the current — and soon to be abolished — unequal districts in Anamosa, Iowa: 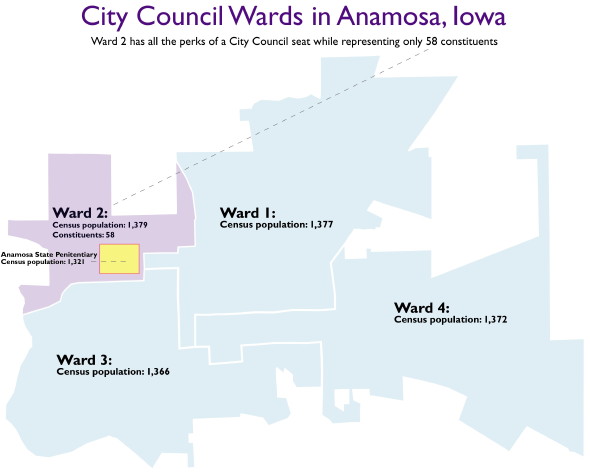