The American system of democracy distributes political power to the people by the means of legislative districts, which are redrawn after the Census each decade to ensure that each district contains the same number of people. When these district lines are fairly drawn around different “communities of interest”, the system works quite well at allowing the citizenry to exert political power in proportion to their numbers. But the discussion over how to best draw the lines breaks down when the underlying Census data does not reflect the actual populations of our communities.

The Census Bureau counts disenfranchised prisoners as if they were residents of the places where they are temporarily and involuntarily incarcerated. One of the most visible impacts on the political process is in New York’s 59th Senate District represented by Senator Dale Volker. Senator Volker claims his stance as the state’s staunchest defender of the draconian Rockefeller drug laws is in the interests of his constituents. But in 2001, only 3 people were sentenced to state prison for drug offenses from Senator Volker’s home Wyoming County. Even when I compensated for the huge population difference between New York City and Wyoming County, I found that New York City residents were 8 times as likely to be sent to prison for drug offenses in 2001 than residents in Wyoming County. 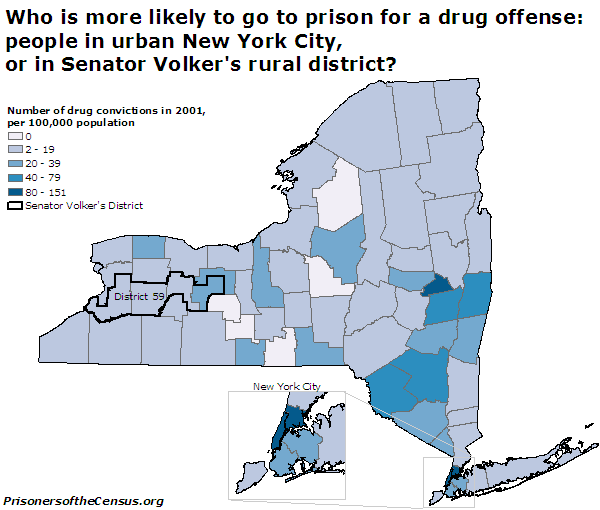 The first map shows the number of drug sentences imposed per year in each county on a per-capita basis, so comparisons on the use of incarceration for drugs can be made regardless of population. The data doesn’t directly say how prevelant drug abuse is in a county, but a quick look at the counties in Senator Volker’s 59th district shows either that drug abuse is not a problem in his district, or if it is, that those communities have made a choice to instead rely on less punitive and more effective means of addressing addiction. Sending the residents of Wyoming County to prison is clearly not a priority. 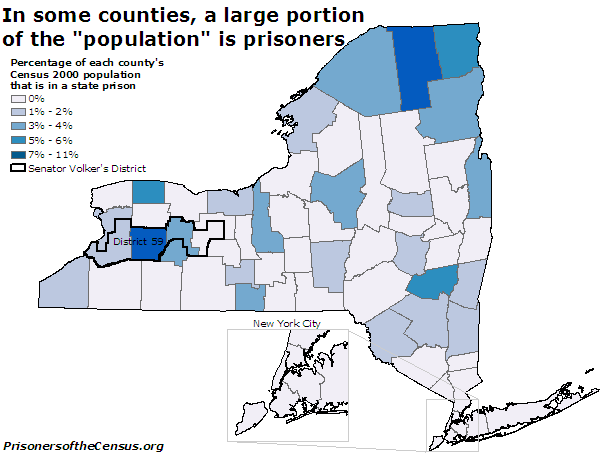 As the second map shows, many upstate New York counties have sizable prison populations that make the counties appear in the Census 5 or 10% larger than they really are. This distorts how legislative districts are drawn and the very purpose of districts.

As the Supreme Court explained when it established the “One Person One Vote” rule and declared unconstitutional a system that weighted votes differently on the basis of where voters lived: “Legislators represent people, not trees or acres. Legislators are elected by voters, not farms or cities or economic interests.” Reynolds v. Sims, 377 US 533 (1964) at 562.

The Supreme Court was not challenging the fact that individual legislators favored the economic and regional interests of their home counties; rather the Supreme Court was declaring unconstitutional a system that distributed political power by anything other than population.

If the residents of a district wish to advocate for more prisons, that is their right. But under the Constitution, every group of 100 such residents should be given the consideration of 100 residents elsewhere in the state. Because Senator Volker’s true district population is 7% smaller than it should be, the current situation in New York is that every group of 93 residents in the 59th District is given the same clout as 100 residents from the urban districts that do not have large prisons.

That dilution of urban voting strength is precisely what the One Person One Vote rule was designed to prevent.