Prisoners in the census dilute democracy in South Dakota

Like most states, South Dakota relies on U.S. Census data to draw its legislative districts. Districts are redrawn each decade so that each districts is of equal size. Having equal numbers of people in each legislative district ensures that each person in that district has an equal access to government. This concept is known as the “One Person One Vote” rule, but it breaks down when the U.S. Census data does not reflect the actual population of the state.

By South Dakota statute, when a person is incarcerated his or her residence remains where he or she lived prior to incarceration:

“A person who has left home and gone into another … county … for a temporary purpose only has not changed his or her residence.” S.D. Codified Laws Sect. 12-1-4 (2003)

Pennington County, which contains Rapid City, has 12% of South Dakota’s population but supplies 24% of the state’s prisoners. At the time of the Census, the county contained no state prisons, so these incarcerated residents of Pennington County were credited to other parts of the state.

Prisoners are not allowed to vote in South Dakota, but the presence of disenfranchised prisoners in the Census counts of prison towns swells the population and political power of those districts at the expense of the prisoner’s home communities. This issue should be of particular concern to Native American communities in South Dakota, because Native Americans are incarcerated at almost 4 times the rate of White people in the state.

According to my analysis of South Dakota legislative districts, 3 districts are at least 3% incarcerated prisoners. In one district, more than 6% of the Census population is behind bars. In these districts, a sizable portion of the district is from somewhere else, making a vote by a real resident of that district more powerful than a vote elsewhere in the state. 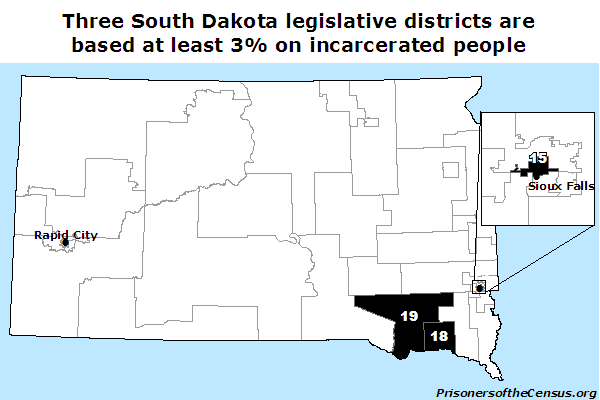 Districts are supposed to be drawn to contain equal numbers of actual population. But in 3 South Dakota districts, a sizable portion of the district is actually disenfranchised residents from elsewhere in the state.

Districts 15 and 19 are perhaps the most interesting, as each were already drawn to be slightly too small. By official numbers, District 19 had 4.59% fewer people than it should, which is right up against the Supreme Court’s allowable limit of 5% population deviation. Its actual population, without the prisoners, is short almost 8% of the required population. By official Census figures, District 15 started somewhat closer to population equality, but without the very large prison in that district, District 15 would be short just over 8% of its required population. District 15 is a portion of Sioux City, so at least some of the prisoners incarcerated there should have been counted elsewhere in that Sioux City district, but the majority likely originate in other districts or counties.

Counting urban prisoners as rural residents violates the very idea of starting with population and deviating from perfect equality only to preserve traditional “communities of interest”. Prisoners are external populations that are not “traditionally” rural in any sense of the word. Allowing communities to take in populations by force, just to benefit in the state legislature, violates any sense of equal protection or fundamental fairness.

One has to wonder: was the South Dakota legislature aware that by relying on uncorrected Census Bureau data to draw its districts, it was diluting the vote of every South Dakota resident who does not live in the same district as a prison?

Credit: Thank you to Bill Cooper of Fairdata2000 for suggesting South Dakota for analysis.