Home Page > Blog > Home is where the cell is? Only to the Census Bureau

Home is where the cell is? Only to the Census Bureau

In the words of U.S. Department of Agriculture demographer Calvin Beale: “A rural prison is a classic ‘export’ industry, providing a service for the outside community.” Although rural counties contain only 20% of the national population, they have snapped up 60% of new prison construction. Like export processing zones in Third World countries, even the raw material is imported for final manufacture. In New York, for example, only 24% of prisoners are from the upstate region, but 91% of prisoners are incarcerated there. 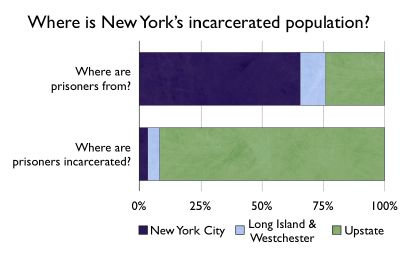 The Census Bureau counts the nation’s mostly urban prisoners as if they were residents of the mostly rural towns that host the prisons. This methodology infects the data used for legislative redistricting and results in a dilution of the voting strength of the communities that have large numbers of people in prison. States with large prison populations violate the 14th Amendment’s One Person One Vote principle when they rely on Census Bureau data to draw their legislative districts.

The growing movement to have the Census Bureau change how it counts the incarcerated is not the first time that people have questioned where prisoners actually reside and then concluded they reside at home. Most states have constitutional clauses or statutes that define residence for incarcerated people to be the place they lived prior to incarceration. Similar rules exist in other contexts, such as determining where a person may file a lawsuit. But no one has summarized the rule and its rationale as clearly as Judge McCree did in a 1973 decision:

It makes eminent good sense to say as a matter of law that one who is in a place solely by virtue of superior force exerted by another should not be held to have abandoned his former domicile. The rule shields an unwilling sojourner from the loss of rights and privileges incident to his citizenship in a particular place….

The Census Bureau has updated its methodology for counting students, the military and other groups in the past. It is now time to update how prisoners are counted.