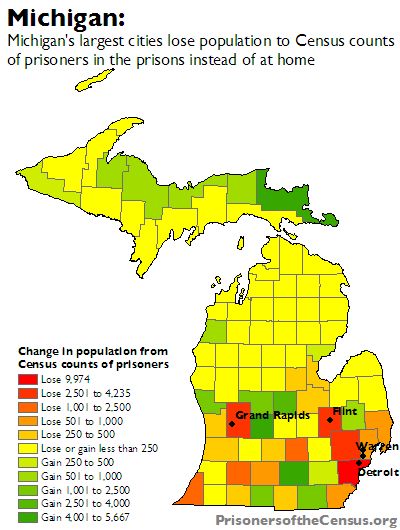 The way the Census Bureau counts state prisoners — not at home but as if they were residents of the prison town — reduces the population of Michigan’s largest cities and makes the prison hosting counties look larger than they really are. Census Bureau figures influence a county’s political clout because these numbers are used to draw legislative district boundaries and distribute some state and federal funds.

Although only 20% of the state’s population, Wayne County (which contains Detroit) is the home of origin for almost 30% of the state’s prisoners. There is a large state correctional facility in the county, but Wayne County had almost 14,000 residents in state prison during Census 2000. As a result, the Census Bureau counted 9,974 Wayne County residents as residents of other counties because they were incarcerated outside the county. Kent, Genesee, Oakland, Ingham and Berrien Counties all lose population to this counting method. (See first map at right.)

The counties with the prisons get credited with this extra population, even though the prisoners have no ties or contact with that community. Chippewa, Iona and Jackson Counties gain more than 4,000 residents this way. Some of the counties with large prison populations are otherwise very small. In Chippewa and Luce Counties, 12 to 13% of the county’s population is not a resident or there by choice: They are incarcerated in a state prison. (See second map at right)

The Michigan Constitutions of 1850 and 1908 recognized that incarceration did not change a residence, and this principle is now preserved in an election law statute. Like most states, the Michigan definition of residence turns on where the person is voluntarily. Incarceration is most definitely an involuntary movement, and as such the Census Bureau should update its “usual residence rule” to count prisoners where they truly reside: at home.