There are 86 unmarried men for every 100 unmarried women in the United States. The ratio will vary between neighborhoods, cities, regions and states from a variety of influences on the statistic. Some are the reflections of women’s longevity, different cultural ideas about marriage, and some are the result of social and economic demographics like the concentration of young people.

The county disparity is huge, ranging from 53.8 to 362 unmarried men per 100 unmarried women. The Census collects marital status data because it helps communities plan for social services and future growth. While relatively useful for some purposes on the state level, this data is more difficult to use on the county or town level because the Census includes “special populations” of prisoners and soldiers — which tend to be male — in with the local community rather than at their actual homes.

END_OF_DOCUMENT_TOKEN_TO_BE_REPLACED

County of conviction and prisoner residence

The general equivalency of the county of conviction and residence datasets can be proven in North Carolina, where the Department of Corrections publishes both sets of information. Analysis shows that the two figures are substantially the same, other than a small number (5%) of prisoners with an out-of-state residence.

Although correcting the Census dataset for redistricting purposes will require the precise address information in the residence files, county-of-conviction data is sufficient to show the necessity of abandoning the Census’s usual residence rule: In most states, prisoners are convicted in a small number of urban counties and incarcerated — where the Census currently counts them — in other counties.

Unfortunately, counting disenfranchised residents for purposes of mis-representation in the legislature is nothing new.

At the founding of the United States, the white population in the South was much smaller than that in the North. In a huge compromise, the original U.S. Constitution allowed the Southern states to count their Black slaves as 3/5ths of a white person. The slaves couldn’t vote, so the slaveowners got to “represent” this captive population in Congress and the Electoral College.

The result? Thanks to its added population, for 32 of the first 36 years of the country, the President was a slave-holder from the otherwise small state of Virginia. Artificially boosting the political power of the South created a national stalemate that prevented the creation of a democratic solution to the slavery problem. What might have been resolved peacefully in the 1790s became the Civil War in the 1860s.

Today, a similar democratic and economic impasse presents itself in the debate over crime control policy. As the economy constricts and state budgets contract, it is absolutely essential that our political structure be responsive to changing needs of the people.

Would a democratically constituted legislature support expensive prisons over proven-effective drug treatment? Counting our population at their true residences and apportioning political power accordingly would be a great way to find out.

According to our recent study, more than half of all prisoners are Black, but only 20% of the prison jobs are held by Black staff. Only 64 prisons in the country have been able to hire Black staff in proportion to the number of Black prisoners; and not a single one of these prisons is located outside the South or the urban cities of the North.

Despite a concerted effort by prison administrators to increase staff diversity, prison staff remain overwhelming white because the prisons themselves are increasingly being built in rural areas rather than in the urban and predominantly minority areas from which most prisoners originate.

This racial disparity between prisoners and staff is another way of illustrating that prisoners tend to come from very different communities than the prisons are physically located in. Counting prisoners in their true communities would give us a more accurate picture of the size and needs of all our communities. 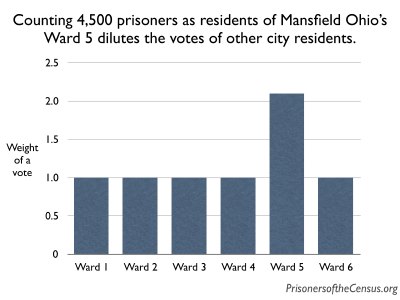 The City’s law director advocated for a redistricting plan that would at least split the prisons into two different districts, complaining that “Deanna [Torrence of the 5th Ward] is only representing 3,000 people (who actually can vote).” The City decided to keep the districts as-is.

It makes no sense to use Census counts of state prisoners to divide up political power within the City of Mansfield. Of course, the best solution would be for the Census to count prisoners at home, not at temporary prisons. 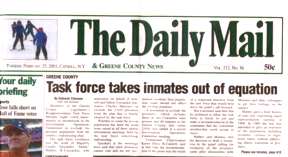 The presence of a prison in a rural area can have a huge impact on Census Bureau statistics about the town or county. In a number of counties in New York, prisons can make up more than 2% of the county’s population, and in the case of Franklin County, prisoners constitute almost 11% of the population reported to the Census.

Call your cell a residence?: Do not pass “GO”, go directly to ….

In 1894, Michael Cady tried to register to vote using his address at the Tombs Jail in New York City. Jail inmates are allowed to vote, but he was convicted for illegal registration because the NY Constitution says that

“no person shall be deemed to have gained or lost a residence, by reason of his presence or absence … while confined in any public prison.”

The prosecution’s theory that that while Cady was allowed to vote, he could not vote in the prison district. Even through Cady was planning on staying at the Tombs forever, Cady must have — the prosecution argued — lived somewhere else before.

“The Tombs is not a place of residence. It is not constructed or maintained for that purpose. It is a place of confinement for all except the keeper and his family, and a person cannot under the guise of a commitment … go there as a prisoner, having a right to be there only as a prisoner, and gain a residence there.”

If calling your jail cell your residence gets you sent to prison, shouldn’t it be illegal for rural legislators to call prisoners their “constituents”?

Buying the prisoner count in Minnesota

“On April Fool’s Day this year state prison wardens gave more than 5,600 inmates time off from their hourly-wage jobs to fill out their census forms. The wardens know how many inmates they have, of course, but only the prisoners know the answers to the more detailed questions posed in the national headcount. So each inmate who cooperated was paid $1…

“A dollar may not sound like much of an incentive, but prison wages are often less than 75 cents an hour….

“The census, as Minnesotans were repeatedly reminded last spring, means money for basic services. The detailed demographic information people offer up on their census forms every ten years translates into federal dollars to help their communities pay for everything from affordable housing to road repair. Prisoners, however, don’t get counted as residents of their former neighborhoods. Instead, the census adds them to the populations of the communities where they are serving time.

Almost 30 percent of new residents who came to Upstate New York in the 1990s didn’t make the trip by choice, and they didn’t move into subdivisions or houses on secluded cul-de-sacs. They were inmates making their new homes in prison cells, according to a new report on population trends in upstate.

That was perhaps the most striking statistic in a new report by the Brookings Institution documenting the stagnation of much of upstate, which grew in population just 1.1 percent in the ’90s.

Counting prisoners in their home community would avoid this type of confusion that skews Census statistics.