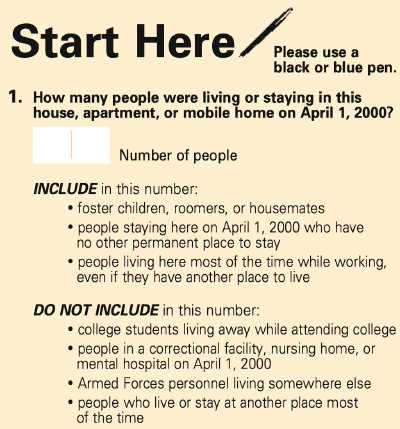 Prior to 1960, the Census was conducted entirely by enumerators who traveled to individual homes and institutions. Enumerators were told in 1850 that the “inmates of a hotel, jail, garrison, hospital, an asylum, or other similar institution, should be reckoned as one family.” In 1890, the forms were changed so that the enumerator could write the address of the family home, or the name and address of the institution on the top and then proceed in identical fashion for family and prison. 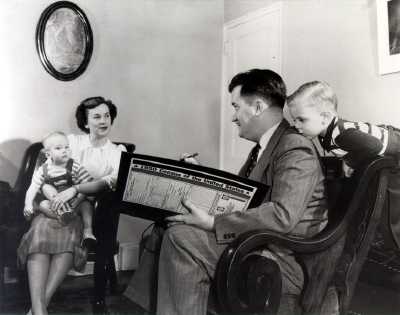 Prior to 1960, the Census relied entirely on door-to-door enumerators such as this man in 1950. (Photo: Census Bureau)

While counting group quarters populations was probably quite easy, it is unclear whether the Census was successful in keeping families from also reporting family members who were in the military, in mental hospitals or in prison.

Today, the count is conducted primarily through the mail. Each household is given instructions on who to count and who to exclude, and it fills out the form as a household.

The 2000 Census form instructed residents to exclude prisoners from the count of their household. But the language on who to include and exclude has evolved over time as a result of changes in both in the Census Bureau’s priorities and in the prevalence of incarceration.

The current question starts “How many people were living or staying in this house, apartment or mobile home on April 1, 2000?” Prisons were not explicitly mentioned on the form until 1990, and the questions on some of the early forms imply that prisoners should have also been counted locally.

From 1850 to 1950 the Census forms were primarily about inclusion, mentioning exclusion only in the context of not counting people who died between Census day and the date the form is completed. If a prison is in an enumerator’s district, the written instructions required inclusion in the count, but there was no similar directive to exclude prisoners who originated in their district and were incarcerated elsewhere. Furthermore, the instructions on the forms used the legal terms of art “abode” and “residence” meaning the place that people choose to be, possibly encouraging households to report temporarily absent prisoners as a part of the “family”:

In the 1980 and prior Censuses, families were not explicitly told to exclude prisoners from the count. The 1980 Census was the last Census taken before incarceration rates began to skyrocket.

Starting in 1960, the Census began to rely on self-enumeration on forms delivered through the mail. Instructions on who to count became more explicit in part because in-person enumerators were being eliminated, and because the Census was becoming more sophisticated and required more accurate results. Although it’s not mentioned on the 1950 form, the enumerator instructions for 1950 reflect the first exclusion: college students living away from the family home will be counted at college. Starting in 1960, the forms started to list groups to exclude, although it would be another 30 years before prisons were explicitly mentioned:

The 1990 census was the first to explicitly instruct that prisoners were not to be counted at home. Why? Prior to the 1990 Census, incarceration was a relatively rare occurrence and probably not worth cluttering up the form with its specific inclusion. Incarceration was low and stable from the beginning of the statistics until about 1980, generally ranging between 95 and 120 prisoners per 100,000 residents. Prior to 1980, the incarceration peak was back during the Great Depression in 1939 with 137 prisoners per 100,000 residents.

In 2001, the United States incarcerated 470 prisoners for every 100,000 residents. If incarceration had remained infrequent, it is unlikely the Census would have needed to change the instruction, and it’s unlikely that there would be enough prisoners to make a difference in the statistics or redistricting.