The Census Bureau counts prisoners not at their homes but as if they were residents of the town that contained the prison. This administrative quirk reduces the population of the communities where most prisoners originate and swells the population of the rural communities that house prisons. Nevada now incarcerates more than 5 times as many people as it did in 1980, making what would once be a trivial issue into a critical one.[1]

When the Census began in 1790, demographics-based planning and redistricting did not yet exist. The Census' sole constitutional mandate was and is to count the number of people in each state to determine their relative populations for purposes of Congressional reapportionment. It didn't matter -- for purposes of comparing Nevada' population to Utah's -- whether an incarcerated person was counted at home or in the Nevada State prison, as long as they were counted in Nevada. Times have changed but Census methodology has not. 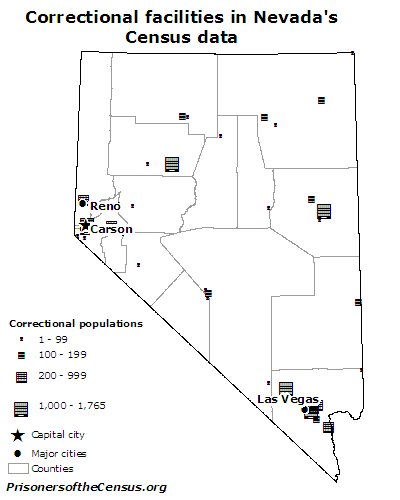 Counting incarcerated people as if they were residents of the prison town leads to misleading portrayals of these communities. Pershing County is one of the 21 counties in the country that has at least 21% of its Census population in prison. Not surprisingly, other demographics are also skewed. The Census Bureau reported that Pershing and Lyon counties more than doubled their Black population during the 1990s. This reflects not new opportunities drawing Black citizens to rural areas but the expansion of the prison population in those counties. A full 95% of the Black population counted in Pershing County is incarcerated.[2] Nevada constitution says that a prison is not a residence

The Nevada constitution, like that of most states, defines residence as the place that you willingly choose to be and explicitly states that a prison can not be a residence:

"No person shall be deemed to have gained or lost a residence solely by reason of his presence of absence .... while confined in any public prison."[4]

As this report illustrates, the incarcerated population in Nevada is now so large that it is no longer possible to ignore the fact that the Nevada constitution requires data different from that provided by the Census Bureau.

Nevada, like most states, relies on Census Bureau data to redraw its state legislative boundaries so that each will contain the same number of people as required by the 14th Amendment's One Person One Vote rule. Equally sized districts ensure that each resident has an equal access to government regardless of where she or he lives. The Census counts everyone, including people who can't vote such as prisoners and children. Basing districts on the total population rather than voters makes sense for most groups. Children and non-citizens, for example, are at least a part of the surrounding community and share some common interests with it. Children can with some confidence rely on their neighboring adults to represent their interests. But prison communities are often very closely aligned with the prison industry and are likely to be quite dissimilar to the communities that the prisoners came from.

The basic principle of American representative democracy is that every vote must be of equal weight. The starting point for state legislative redistricting is the landmark 1963 Supreme Court case Reynolds v. Sims.[5] Reynolds struck down an apportionment scheme for the Alabama state legislature that was based on counties and not population:

"Legislators represent people, not trees or acres. Legislators are elected by voters, not farms or cities or economic interests."[6]

In 1960 Alabama, Lowndes County with 15,417 people had the same number of state senators as Jefferson County with 634,864 people. Believing the situation in Alabama to be illustrative of a large number of other states drawing legislative boundaries in such as way as to dilute the political power of citizens based on where they lived, the Supreme Court wrote a very broad opinion to guide the states in fairly apportioning both houses of the state legislatures.

If districts are of equal size, each citizen has equal access to a representative to advocate for her or his needs. When districts are of substantially different sizes, the weight of each vote starts to differ. In under-populated districts, each vote is worth more, and in overpopulated districts, a vote is worth less. In 1960 Alabama, a Lowndes County senator had the same political power as one from Jefferson County, but the Lowndes County senator could devote her or himself to advancing the interests of only 15,417 people. As a result, a vote in Lowndes county was worth over 41 times a vote in Jefferson county. Reynolds v. Sims barred this practice and put it plainly: "[T]he weight of a citizen's vote cannot be made to depend on where he lives."[7] 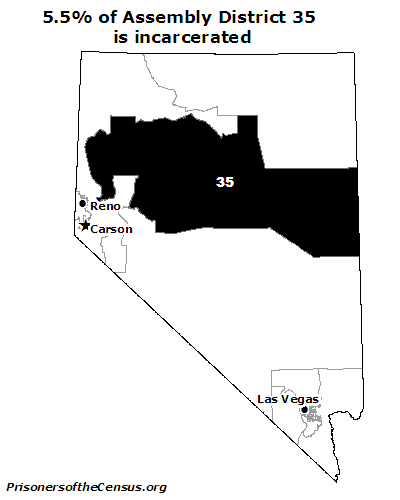 In Nevada, an Assembly district is supposed to contain 47,578 people, and each district does contain very close to that figure But because of how the Census Bureau counts the incarcerated population, the drafters of legislative districts should not assume that everyone is a resident of the place where they are counted. Nevada Assembly District 35 in Churchill, Eureka, Humboldt, Lander, Pershing Washoe and White Pine Counties, currently represented by Pete Goicoechea, is 5.5% prisoners. (See figures 3 and 4.) These disenfranchised prisoners are overwhelmingly from homes outside the district, meaning that the actual population of the district is smaller than it should be. Every group of 95 residents in District 35 gets as much of a say over state affairs as 100 people in Las Vegas, Reno, or any other part of the state not adjacent to a large prison. 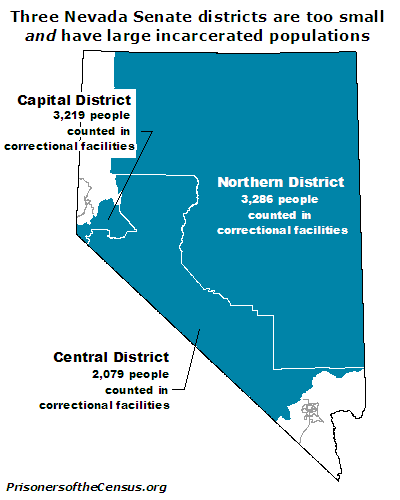 Figure 5. Map of Nevada's 3 underpopulated Senate districts where the Census counted large populations that are actually residents of other parts of the state.

In the Nevada Senate, the districts were not drawn as equally. According to the Census figures, many of the districts in Clark County which contains Las Vegas to contain almost 5% too many people. Many of the more rural districts were drawn to contain almost 5% too few people, for a combined maximum deviation of 9.91%. This is right up against the Supreme Court's maximum allowable deviation in district sizes of 10%.[8]

On the basis of the Census data, the Nevada Senate districts might be constitutional, but to the misfortune of Clark County residents, it is the most under-populated Senate districts that also contain the largest prison populations. Compared against the definition of residence in the Nevada Constitution that has prisoners residing not in the prison but in their home communities, the actual populations of these already too-small districts would be as much as 8.3% too small. (See figures 5 and 6.) As a result, a group of 92 residents in the Capital Senate District is given the consideration on state affairs of 100 residents elsewhere in the state.

Nevada will not be redrawing its district lines again until after the 2010 Census, but planning for that Census is currently underway. If Nevada wants to the Census Bureau's data to be compatible with how its constitution defines residence for incarcerated people, it needs to make that fact known to the Census Bureau.

Historically, the Census Bureau has proven itself to be an agency very responsive to the needs of its data users. The method of counting other special populations has changed numerous times, in each case responding to changing demographics and needs in the country. When evolving demographics meant more college students studying far from home and more Americans living overseas, the Census policy changed in order to more accurately reflect how many Americans were living where. Today, the growth in the prisoner population requires the Census to update its methodology once again.

[8] White v Regester 412 U.S. 755 (1975). However, the average deviation is the Nevada Districts is 3.78%, more than twice the 1.82% average deviation in White. The small average deviations in White served a "rational state policy" by protecting communities of interest. While this author wonders whether what appears to be a deliberate plan to dilute the votes of Las Vegas residents and increasing the weight of votes in rural counties can constitute a "rational" state policy, using federal Census data that credits the prison towns with extra population in violation of the state constitution would seem to be even more problematic. Allowing communities to take in populations by force, just to benefit at the state legislature, most certainly violates any sense of equal protection or fundamental fairness.

This report uses the total correctional populations (state, federal and military prisons, local jails, halfway houses, and "other correctional facilities") as counted and placed by U.S. Census 2000 and made available on the American Factfinder System. The impact on legislative districts was calculated by placing these correctional populations within the district shapefiles provided on the website of the Research Division of the Nevada State Legislature.

Peter Wagner is Assistant Director of the Prison Policy Initiative, an Open Society Institute Soros Justice Fellow, and a 2003 graduate of the Western New England College School of Law. Mr. Wagner is the author of Importing Constituents: Prisoners and Political Clout in New York (April, 2002), the first systematic state analysis of the impact of prisoner enumeration policies on legislative redistricting. He has spoken and testified at numerous national and state forums on this topic. Mr. Wagner edits PrisonersoftheCensus.org and writes a weekly fact column for the website about the varied impacts on society from miscounting prisoners.

His most recent publications are The Prison Index: Taking the Pulse of the Crime Control Industry (April 2004) and with Eric Lotke, "Prisoners of the Census: Electoral and Financial Consequences of Counting Prisoners Where They Go, Not Where They Come From" (forthcoming, Pace Law Review).

This research was supported by a grant from the Soros Justice Fellowship Program of the Open Society Institute.

Brigette Sarabi and Richard Siegel provided helpful feedback and inspiration for this report, although the responsiblity for the conclusions and any errors rests solely with the author.

The Prison Policy Initiative (PPI) conducts research and advocacy on incarceration policy. Its work starts with the idea that the racial, gender and economic disparities between the prison population and the larger society represent the grounds for a democratic catastrophe. PPI's concept of prison reform is based not only in opposition to a rising rate of incarceration, but in the search for a lasting solution to pressing social problems superior to temporarily warehousing our citizens in prisons and jails.

About the Progressive Leadership Alliance of Nevada (PLAN)

Progressive Leadership Alliance of Nevada (PLAN) is a non-profit organization dedicated to serving the people of Nevada. PLAN was formed in 1994 to bring people and organizations together who are committed to making a positive difference. PLAN provides a vehicle in Nevada for building consensus and collective strategies among progressives on a range of issues including welfare, immigration, taxes, environment, campaign finance reform, economic justice and reproductive choice.