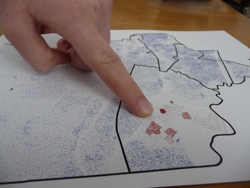 The District Court ruled the city's prison gerrymandering unconstitutional, reasoning that the city could not count incarcerated people in city council districts as if they were city residents while not treating them as constituents when it came time to represent them. But the First Circuit Court of Appeals reversed the decision, allowing the City to continue using the Census' unadjusted redistricting data despite the prison miscount.

The plaintiffs were four Cranston voters who lived outside of Ward 6, and the ACLU of Rhode Island. The Prison Policy Initiative, ACLU Voting Rights Project, Dēmos, and Lynette Labinger of Roney & Labinger LLP were counsel to the plaintiffs.

United States District Court for the District of Rhode Island

Appeal: United States Court of Appeals for the First Circuit